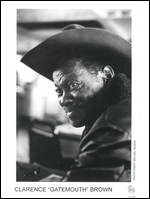 Clarence "Gatemouth" Brown (April 18, 1924 - September 10, 2005) was an American musician from Louisiana and Texas.[1] He is best known for his work as a blues musician, but embraced other styles of music, having "spent his career fighting purism by synthesizing old blues, country, jazz, Cajun music and R&B styles"[2] His work also encompasses rock and roll, rock music, folk, electric blues, and Texas blues.[1]

He was an acclaimed multi-instrumentalist, who played an array of musical instruments such as guitar, fiddle, mandolin, viola as well as harmonica and drums. He won a Grammy Award for Best Traditional Blues Album in 1983 for his album, Alright Again![3] He is regarded as one of the most influential exponents of blues fiddle and has had enormous influence in American fiddle circles.[4]

Born in Vinton, Louisiana, Brown was raised in Orange, Texas. His professional musical career began in 1945, playing drums in San Antonio, Texas.[6] He was given the nickname "Gatemouth" by a high school teacher who said he had "voice like a gate".[1] His career was boosted while attending a 1947 concert by T-Bone Walker in Don Robey's Bronze Peacock Houston nightclub.[1] When Walker became ill, Brown took up his guitar and quickly wrote and played "Gatemouth Boogie," to the delight of the audience right on the spot.[5]

In 1949 Robey founded Peacock Records in order to showcase Brown's virtuoso guitar work.[1] Brown's "Mary Is Fine"/"My Time Is Expensive" was a hit for Peacock in 1949.[5] A string of Peacock releases in the 1950s were less successful commercially, but were nonetheless pioneering musically. Particularly notable was the 1951 instrumental "Okie Dokie Stomp",[5] in which Brown solos continuously over a punchy horn section (other instrumentals from this period include "Boogie Uproar" and "Gate Walks to Board").[1] Okie Dokie Stomp was also recorded by Cornell Dupree in the 1970s and he had success with it as well. As for his gutsy violin playing, Robey allowed him to record "Just Before Dawn", his final release on the Peacock label, in 1959.

In the 1960s Brown moved to Nashville, Tennessee to participate in a syndicated R&B television show, and while he was there recorded several country singles.[6] He struck up a friendship with Roy Clark and made several appearances on the television show Hee Haw.[1] In 1966, Brown was the musical director for the house band on the short-lived television program, The !!!! Beat.[5]

However, in the early 1970s several countries in Europe had developed an appreciation for American roots music, especially the blues, and Brown was a popular and well-respected artist there.[6] He toured Europe twelve times, beginning in 1971 and continuing throughout the 1970s. He also became an official ambassador for American music, and participated in several tours sponsored by the U.S. State Department, including an extensive tour of Eastern Africa. Brown appeared at the 1973 Montreux Jazz Festival, where he jammed with American blues rock band Canned Heat.[6] In 1974, he recorded as a sideman with the New Orleans pianist Professor Longhair on his album, Rock 'N' Roll Gumbo (originally a Blue Star Records release). He moved to New Orleans in the late 1970s. In 1979, through his manager at the time, Jim Halsey, Brown embarked on a 6-week, 44 concert tour of the Soviet Union. This was an historic event as it marked the first time the Soviet Union made a contract with a U.S. private citizen (Jim Halsey) as regards a musical tour. All previous tours were under the auspices of the U.S. State Department. To date, this was by far the most extensive tour an American band had taken in the USSR.

In the 1980s, a series of releases on Rounder Records and Alligator Records revitalized his U.S. career,[6] and he toured extensively and internationally, usually playing between 250 and 300 shows a year. He won a Grammy in 1983 for the album Alright Again! and was nominated for five more. Alright Again! is credited with putting Brown back on the musical map. He also won 8 WC Handy Awards. In 1999 Brown was inducted into the Blues Hall of Fame.[7]

In his last few years, he maintained a full touring schedule, including Australia, New Zealand, South America, Africa and Eastern Europe. His final record "Timeless" was released in 2004.

In September 2004, Brown was diagnosed with lung cancer. Already suffering from emphysema and heart disease, he and his doctors decided to forgo treatment. This greatly affected his musical career.[7] Later his home in Slidell, Louisiana was destroyed by Hurricane Katrina in 2005, and he was evacuated to his childhood home town of Orange, Texas, where he died on September 10, 2005 at the apartment of a niece, at the age of 81. Brown is buried in the Hollywood Cemetery in Orange, Texas. However, flooding caused by Hurricane Ike in September 2008 damaged his grave.[8] His grave has since been refurbished and through donations a very impressive headstone has been erected in his honor.

This article uses material from the article Clarence "Gatemouth" Brown from the free encyclopedia Wikipedia and it is licensed under the GNU Free Documentation License.

Johann Sebastian Bach Schlafe mein Liebster
Update Required To play the media you will need to either update your browser to a recent version or update your Flash plugin.