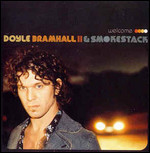 Doyle Bramhall II (born 24 December 1968)[2] is an American musician, producer, guitarist, and songwriter known for his work with Eric Clapton, Roger Waters, and many others. He is the son of the songwriter and drummer Doyle Bramhall.

Bramhall was born in Texas and lived half of his life in Northern California. His father, Doyle Bramhall, Sr., played drums for the legendary bluesmen Lightnin' Hopkins and Freddie King and was a lifelong collaborator with his childhood friends Stevie Ray Vaughan and Jimmie Vaughan.

When Bramhall was 18, he toured with Jimmie Vaughan's band, the Fabulous Thunderbirds. Two years later he co-founded the blues rock band Arc Angels with fellow Austinite Charlie Sexton and members from Stevie Ray Vaughan's rhythm section, Chris Layton and Tommy Shannon. In 1996,he released his first solo album, Doyle Bramhall II. Following the 1999 release of Jellycream, Bramhall's second album and first for RCA, he received phone calls from both Roger Waters and Eric Clapton.[3] Bramhall joined Waters on his In the Flesh tour, playing guitar and providing background and lead vocals. His performances were recorded on the subsequent live album and DVD, In the Flesh – Live. Bramhall also played guitar on Clapton's Riding With the King, a collaboration with B.B. King. The album included versions of Clapton's and King's songs, and covers of blues songs—including two Bramhall-penned tracks originally from Jellycream.

In 2013, Bramhall completed co-production on Eric Clapton's 2013 release Old Sock, and played guitars on his 2014 release The Breeze: An Appreciation of JJ Cale. He joined Clapton on his 50th anniversary tour as an opening act and backing musician.[9] He appeared at Clapton's Crossroads Guitar Festival and was recorded for the subsequent live album and DVD.[10] Bramhall played lead guitars on Elton John's 2013 album The Diving Board.[11]

In 2015,[12] he joined the Tedeschi Trucks Band and Sharon Jones & the Dap Kings for the "Wheels of Soul" tour across the United States. He performed both as an opening act and as a rhythm guitarist in the Tedeschi Trucks Band, performing songs ranging from his days with the Arc Angels to unreleased songs.[13] Also in 2015, he joined the Tedeschi Trucks Band and alumni from the 1970 Joe Cocker Mad Dogs and Englishmen Tour, including Leon Russell, Rita Coolidge, Bobby Torres, Claudia Lennear, Chuck Blackwell, Pamela Polland, Daniel Moore, Matthew Moore, Chris Stainton, and photographer Linda Wolf and in a tribute concert to honor Joe Cocker.[14]

On September 30, 2016, Bramhall released his 4th studio album titled Rich Man. The album consists of 12 originals and a cover of Jimi Hendrix's "Hear My Train A Comin'".[15]

In 2018, it was announced that Bramhall had signed to Mascot Label Group, with a new album expected in the fall of that same year[16]. The album, entitled "Shades", is expected to be released on October 5th, 2018, following the lead single "Everything You Need", a duet with Eric Clapton. In addition to Clapton, the album will also feature collaborations with Norah Jones, Greyhounds, and Tedeschi Trucks Band.[17]

Bramhall is notable as one of the few guitarists who plays with his instrument strung upside-down.[18] He plays left-handed, but the instrument is strung upside-down with the high E on the top. This unusual arrangement of the strings gives his playing a unique sound, because he bends the strings by pulling them downwards rather than upwards, the customary approach. Others who have bent strings in this direction include Albert King, Eric Gales, Otis Rush, Barbara Lynn, Coco Montoya and the late blues guitarist Jeff Healey, who played with his instrument flat on his lap for stability and increased string flexibility.[19]

This article uses material from the article Doyle Bramhall II from the free encyclopedia Wikipedia and it is licensed under the GNU Free Documentation License.