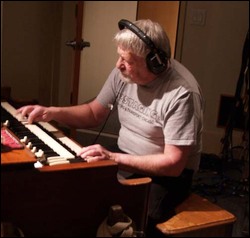 Lawrence William "Larry" Knechtel (August 4, 1940 – August 20, 2009) was an American keyboard player and bassist, best known as a member of the Wrecking Crew, a collection of Los Angeles-based session musicians who worked with such renowned artists as Simon & Garfunkel, Duane Eddy, the Beach Boys, the Mamas & the Papas, the Monkees, the Partridge Family, the Doors, the Grass Roots,[1] Jerry Garcia, and Elvis Presley, and as a member of the 1970s band Bread.

Born in Bell, California, in 1940, Knechtel began his musical education with piano lessons. In 1957, he joined the Los Angeles-based rock and roll band Kip Tyler and the Flips. In August 1959, he joined instrumentalist Duane Eddy as a member of his band the Rebels. After four years on the road with the band, and continuing to work with Eddy in the recording studio, Knechtel became part of the Los Angeles session musician scene, working with Phil Spector as a pianist to help create Spector's famous "Wall of Sound". Knechtel became a prominent member of session musicians the Wrecking Crew, performing on many hit songs of the period[2] and earning him entry into the Musicians Hall of Fame and Museum in 2007.

In 1970 Knechtel won a Grammy Award for his piano work on "Bridge over Troubled Water" by Simon and Garfunkel. He also played the piano on Johnny Rivers' 1972 hit "Rockin' Pneumonia and the Boogie Woogie Flu".

Knechtel was proficient on other musical instruments, notably the harmonica, guitar and bass, which can be heard on "Mr. Tambourine Man" by the Byrds, "Stoney End" by Barbra Streisand, "If I Can Dream" by Elvis Presley, and the Doors' debut album. In 1971, he joined the band Bread, where his contributions include the guitar solo on the hit single "The Guitar Man". He also played on sessions for Nancy Sinatra.

During the late 1980s, Knechtel moved to Nashville, where he was signed to a solo recording contract. He released two solo albums in quick succession, Mountain Moods (1989)[3] and Urban Gypsy (1990).[4]

In later years, Knechtel lived in semi-retirement in Yakima, Washington, until his death. He had, however, worked with record producer Rick Rubin, contributing keyboards to albums by Neil Diamond, Arlen Roth and the Dixie Chicks, touring with Elvis Costello and with the Dixie Chicks in support of their Grammy Award-winning album Taking the Long Way. During this time Knechtel contributed guest spots on many recordings for dozens of Northwest artists including Wayman Chapman, Ken Stringfellow (Posies, R.E.M., Big Star), Quakers On Probation, Dimestore Mystery, Elba, Animals at Night, Zera Marvel, Colin Spring and his son, Lonnie Knechtel.

Knechtel died on August 20, 2009, in Yakima Valley Memorial Hospital, Washington, at the age of 69 of an apparent heart attack.[5]

In 2007 Knechtel, along with the other members of The Wrecking Crew, was inducted into the Musicians Hall of Fame and Museum in Nashville, Tennessee.

With The We Three Trio

With The Beach Boys

With [The Mamas and the Papas]

This article uses material from the article Larry Knechtel from the free encyclopedia Wikipedia and it is licensed under the GNU Free Documentation License.