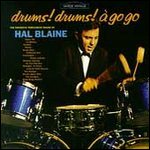 He is most known for his work with the Wrecking Crew in California. Blaine played on numerous hits by popular groups, including Nancy Sinatra, Jan and Dean, Elvis Presley, John Denver, the Ronettes, Simon & Garfunkel, the Carpenters, the Beach Boys, the Grass Roots,[2] the 5th Dimension, the Monkees, the Partridge Family, and Steely Dan. He has played on 40 number one hit singles, 150 top ten hits and has performed on, by his own accounting, over 35,000 recorded tracks. He is widely regarded as one of the most prolific drummers in rock and roll history, having "certainly played on more hit records than any drummer in the rock era".[3]

Blaine is a member of the Rock & Roll Hall of Fame, Musicians Hall of Fame and Museum, and the Percussive Arts Society Hall of Fame. He was inducted into the Modern Drummer Hall of Fame in 2010.[4]

Blaine was born to Jewish Eastern European immigrants, Meyer and Rose Belsky, in Holyoke, Massachusetts.[5] In 1944, aged 15, Blaine survived the Hartford circus fire - one of the worst disasters in American history.[6]

Hal Blaine Strikes Again is a rubber stamp used by Blaine to mark music scores and places where he has played. Drummer and author Max Weinberg, in his introduction to the chapter on Blaine in his book, writes:

Eleven years later our band played Wembley Arena, near London. After the show, while we were relaxing backstage, Bruce [Springsteen] asked me to come into his dressing room. I went in, he pointed to the wall and said, "Look at that." I looked at the wall but didn't see anything except peeling wallpaper. "Look closer," he said. Finally, I got right down on the spot he was pointing to. and right there, in a crack in the paper, rubber stamped to the wall, it said HAL BLAINE STRIKES AGAIN.[7] When asked to explain about the stamp Blaine replied, "I always stamp my charts. And there's a reason why I started that; it wasn't all ego." He went on to describe that occasionally he would need to find a particular chart amidst "five hundred pieces of music in a pile" and he needed some mark to do so. "Eventually I had a rubber stamp made up, and from that day on I've always stamped every piece of music I play, whether it's a demo or something I play at a friend's house."[7]

Another drummer, Mike Botts, then with the band Bread, recalled: "Every studio I went to in the late sixties, there was a rubber stamp imprint on the wall of the drum booth that said, 'Hal Blaine strikes again.' Hal was getting so many studio dates he actually had a rubber stamp made. He was everywhere!" [8]

A little known Grammy Awards achievement by Blaine is that he played on six consecutive Record of the Year winners:

Hal Blaine's drums can be heard as part of the Wall of Sound on the Ronettes' 1963 No. 2 hit "Be My Baby",[14] produced by Phil Spector at Hollywood's Gold Star Studios. Max Weinberg wrote, "If Hal Blaine had played drums only on the Ronettes' "Be My Baby", his name would still be uttered with reverence and respect for the power of his big beat."[15] Rolling Stone magazine listed the song as No. 22 on The 500 Greatest Songs of All Time.

In March 2000 he was one of the first five sidemen inducted into the Rock and Roll Hall of Fame (one of the other inductees was his long-time friend and drumming colleague, Earl Palmer.)

Artists with whom Blaine has recorded

Some of the famous musicians with whom Blaine has worked include:

This article uses material from the article Hal Blaine from the free encyclopedia Wikipedia and it is licensed under the GNU Free Documentation License.