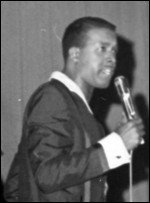 He was also a voice artist in film and animated television series, most famously having provided the voice of the alien plant Audrey II in the musical horror film Little Shop of Horrors, and Mother Brain in Captain N: The Game Master. Stubbs was admired by his peers for his impressive vocal range.

Born in Detroit in 1936, Stubbs had a brother, Joe, who later became a member of 100 Proof Aged In Soul, The Falcons, The Contours and The Originals. His cousin was Jackie Wilson.[1] Stubbs attended Pershing High School where he met Abdul "Duke" Fakir.[2] He began his professional singing career with friends Fakir, Renaldo "Obie" Benson, and Lawrence Payton, forming a singing group called The Four Aims in 1954.[3] Two years later, after having signed with Chess Records, the group changed their name to the Four Tops. The name change was meant to avoid confusion with the then-popular Ames Brothers.[3] The Four Tops began as a supper-club act before signing to Motown Records in 1963. By the end of the decade, the Four Tops had over a dozen hits. The most popular of their hits (all of which featured Stubbs on lead vocals) include "Baby I Need Your Loving", "I Can't Help Myself (Sugar Pie, Honey Bunch)", "It's the Same Old Song", "Reach Out I'll Be There", "Standing in the Shadows of Love", "Bernadette", "Still Water (Love)", "Ain't No Woman (Like the One I've Got)" as well as the late hit "Loco In Acapulco". Although Stubbs was a natural baritone, most Four Tops' hits were written in a tenor range to give the lead vocals a sense of urgency.

Despite being the most prominent member of the group, Stubbs refused to have separate billing (in contrast to other Motown acts such as Smokey Robinson and the Miracles and Diana Ross and the Supremes),[4] and he also turned down several offers for a solo career, out of loyalty to his bandmates.[4] Stubbs and the other Tops remained a team until Payton died in 1997, at which point Theo Peoples took his place. The Four Tops were elected to the Rock and Roll Hall of Fame in 1990, and have sold over 50 million records worldwide.[3]

In 2000, Theo Peoples replaced Stubbs as lead singer after Stubbs suffered a stroke, with Ronnie McNeir taking the place that Payton originally held. Benson died on July 1, 2005, leaving Duke Fakir as the only surviving member of The Four Tops' original lineup.[4]

Stubbs also guest starred in a number of TV shows as himself. Berry Gordy offered him the role of Louis McKay in the 1972 film Lady Sings the Blues, opposite Diana Ross as Billie Holiday, but Stubbs turned it down, once again not wishing to overshadow the other members of the Four Tops.[4]

Levi Stubbs and his wife Clineice were married from 1960 until his death. The couple had five children.[1]

Stubbs was diagnosed with cancer, in 1995, and later he was no longer able to tour with the group after suffering a stroke. He died in his sleep on October 17, 2008, at his home in Detroit.[6] A memorial service for Stubbs was held at the Greater Grace Temple in Detroit on October 27. Many of Stubbs' friends from the music industry attended including Berry Gordy, Martha Reeves, Brian Holland, Ali-Ollie Woodson, and Dennis Edwards. Detroit City Council member JoAnn Watson, along with Martha Reeves, presented a resolution naming Stubbs' birthday "Levi Stubbs Day" in Detroit.[7] Stubbs is interred at Detroit's historic Woodlawn Cemetery.[8]

This article uses material from the article Levi Stubbs from the free encyclopedia Wikipedia and it is licensed under the GNU Free Documentation License.