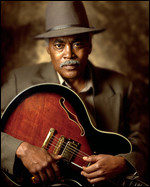 Jimmy Burns (born February 27, 1943, Dublin, Mississippi, United States) is an award winning American soul blues and electric blues guitarist, singer and songwriter.[1] Although he was born in the Mississippi Delta, Burns has spent nearly all his life in Chicago. His elder brother, Eddie "Guitar" Burns, is a Detroit blues musician.[2]

Burns's father was a sharecropper who performed as a singer in medicine shows.[2] At the age of 12, Jimmy Burns moved with his family to Chicago and four years later joined The Medallionaires who recorded a couple of doo-wop tracks. Recording mostly solo in the 1960s, Burns issued singles for the USA, Minit, Tip Top and Erica labels.[3] He toured the Midwest with his backing group, the Fantastic Epics, and with another outfit called Jimmy Burns and the Gas Company into the early 1970s. Burns then took a long break from the music industry to raise his family.[1][3]

He performed infrequently until the early part of the 1990s, when he started a long residency at Chicago's Smokedaddy Club. It was there that Delmark Records boss Bob Koester first heard Burns perform, and agreed to record him after hearing only one set of music. His debut album for Delmark in 1996, Leaving Here Walking, was produced by Scott Dirks, and was awarded the 'Best Blues Record of the Year' title by the National Association of Independent Record Distributors, and received two W.C. Handy Award nominations. Burns then began touring internationally.[3]

This article uses material from the article Jimmy Burns from the free encyclopedia Wikipedia and it is licensed under the GNU Free Documentation License.