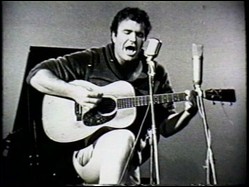 Hoyt Wayne Axton (March 25, 1938 October 26, 1999)[1] was an American folk music singer-songwriter, and a film and television actor. He became prominent in the early 1960s, establishing himself on the West Coast as a folk singer with an earthy style and powerful voice. As he matured, some of his songwriting efforts became well known throughout the world. Among them were "Joy to the World", "The Pusher", "No No Song", and "Greenback Dollar".

He was born in Duncan, Oklahoma and spent his pre-teen years in Comanche, Oklahoma with his brother, John.[2] His mother, Mae Boren Axton, co-wrote the classic rock 'n' roll song "Heartbreak Hotel", which became the first major hit for Elvis Presley. Some of Hoyt Axton's own songs were also later recorded by Elvis. Hoyt Axton's father, John T. Axton, was a Navy officer stationed in Jacksonville, Florida; the family joined him there in 1949. Axton graduated from Robert E. Lee High School in 1956 and left town after Knauer's Hardware burned down on graduation night, a prank gone wrong.[3] Axton attended Oklahoma State for a short length of time before following his father and enlisting in the Navy. Axton served aboard the USS Ranger before pursuing a music career.[4]

After his discharge from the Navy on the West Coast, he began singing folk songs in San Francisco nightclubs. In the early 1960s he released his first folk album titled The Balladeer (recorded at the Troubadour), which included his song "Greenback Dollar", a 1963 hit for The Kingston Trio. Axton released numerous albums well into the 1980s.

Axton had many minor singing hits of his own, such as "Boney Fingers", "When the Morning Comes", and 1979's "Della and the Dealer", as well as "Jealous Man" (the latter two he sang in a guest appearance on WKRP in Cincinnati). His vocal style featured his distinctive bass-baritone (which later deepened to near-bass) and use of characterization.

But his most lasting contributions were songs made famous by others: "Joy to the World" and "Never Been to Spain" (Three Dog Night), the previously mentioned "Greenback Dollar" (Kingston Trio), "The Pusher" and "Snowblind Friend" (Steppenwolf), "No-No Song" (Ringo Starr), and an array of others, covered by singers such as Joan Baez, Guthrie Thomas, John Denver, Waylon Jennings, and Anne Murray. Axton also sang a couple of duets with Linda Ronstadt, including "Lion in Winter" and "When the Morning Comes" (a top 40 country hit). His most popular and signature song, "Joy to the World", as performed by Three Dog Night, was Number 1 on the charts for six straight weeks in 1971, making it the top hit of the year.

Axton first appeared on television in a David L. Wolper ABC production of The Story of a Folksinger (1963). He frequently appeared on Hootenanny (US TV series), hosted by Jack Linkletter during this period. In 1965, he appeared in an episode of Bonanza, then followed with other TV roles over the years. As he matured, Axton as an actor specialized in playing good ol' boys on television and in films. His face became well known in the 1970s and 1980s through many TV and film appearances, such as in the movies Gremlins and The Black Stallion. He sang the jingle "Head For the Mountains" in the Busch beer commercials in the 1980s (and also "The Ballad of Big Mac", touting McDonald's Big Mac on screen in a 1969 commercial he filmed for the hamburger franchise).

Axton spent some time struggling with cocaine addiction and several of his songs, including "The Pusher", "Snowblind Friend", and "No-No Song", partly reflect his negative drug experiences. He had been known as an opponent of drug use for many years when, in February 1997, he and his wife were arrested at their Montana home for possession of approximately 500 grams of marijuana, a little over a pound. His wife explained later that she offered Axton marijuana to relieve pain and stress following a 1995 stroke; both were fined and given deferred sentences.

Axton never fully recovered from his stroke, and still had to use a wheelchair much of the time. His mother, Mae, drowned in a hot tub at her Tennessee home in 1997. Hoyt Axton died of a heart attack in Victor, Montana, on October 26, 1999, at the age of 61,[5] after suffering a severe heart attack two weeks earlier.[6]

On November 1, 2007 he and his mother were inducted posthumously to the Oklahoma Music Hall of Fame in Muskogee, Oklahoma.[7][8]

Among his best-known compositions (or co-writing credits) are:

"Della and the Dealer" and "Hotel Ritz" both became minor hit singles in the UK after extensive playing by the British D.J. Terry Wogan on his BBC Radio 2 breakfast program of the time.

Axton also performed the theme song that plays over the closing credits of the movie Mitchell.

Axton also composed and sang the theme song to the short-lived television sitcom Flo. Several songs for the 1977 film Outlaw Blues were composed by Axton and sung by Peter Fonda.[10]

The Rousters was a short-lived television sitcom (1983) with Axton as 'Cactus' Jack Slade. The show starred Chad Everett as Wyatt Earp III, the grandson of the legendary Wyatt Earp, and Jim Varney as his dim-witted brother, Evan.

In the mid '90s, Axton was chosen to host and narrate the profile series The Life and Times on The Nashville Network, in which a different country music figure was spotlighted each hour. His voice was heard throughout and he was seen on-camera doing the introduction and closing of each show in which he participated.

Axton also showed up as the narrator for two documentaries of the Western States 100 Mile Endurance Race in 1982 and 1983 called Desperate Dreams.

This article uses material from the article Hoyt Axton from the free encyclopedia Wikipedia and it is licensed under the GNU Free Documentation License.