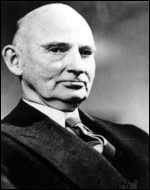 Charles "Carl" Sprague Ruggles (March 11, 1876  October 24, 1971) was an American composer of the American Five group. He wrote finely crafted pieces using "dissonant counterpoint", a term coined by Charles Seeger to describe Ruggles' music. His method of atonal counterpoint was based on a non-serial technique of avoiding repeating a pitch class until a generally fixed number such as eight pitch classes intervened. He wrote painstakingly slowly so his output is quite small.

Carl Ruggles was born in Marion, Massachusetts in 1876. His mother died at an early age and he was raised mainly by his grandmother. Ruggles' father, Nathaniel, was rumored to have a gambling problem and lost most of the family's inherited wealth. Carl was never very close to his father and never saw him from the age of 29 onwards. He teutonized his name to 'Carl' at an early age (partially due to his great admiration for German composers, especially Richard Wagner and Richard Strauss), and though he never legally changed it, signed all documents and works in his adult life Carl Ruggles. Carl began taking violin lessons at the age of four with a local itinerant music teacher. He continued playing and gave performances on the violin, which were usually received well. Carl was appointed director of the YMCA orchestra in 1892. A review said A musical program of entertainment was rendered in the church, each number of which received hearty applause. Master Charles Ruggles' violin selections were rendered with much feeling and delicacy. He captivated the audience by his manly bearing, and is evidently at home in the concert room.

In 1899, C.W. Thompson & Co. published Ruggles' first compositions. They were three songs titled How Can I Be Blythe and Glad, At Sea and Maiden with Thy Mouth of Roses. The first song is one of two surviving compositions from his early days; all others are presumed to have been destroyed by Ruggles himself. Eventually Ruggles had to work to support himself as his family's financial situation worsened. He worked a number of odd jobs and started to teach violin and music theory privately. Unfortunately the latter did not provide much income or success. In 1902 he started writing music criticism for the Belmont Tribune and the Watertown Tribune. This continued until July 1903. Ruggles' reviews are characteristically brash: He did not hesitate to express his opinion, laudatory or not.

In 1906, he met his future wife, Charlotte Snell, a contralto. Ruggles began a search for steady employment so he and Charlotte could marry. This led him to Winona, Minnesota to work for the Mar D'Mar School of Music as a violin teacher. He became active as a soloist as well as eventually directing the Winona Symphony Orchestra. In the meantime, Charlotte joined him as a vocal teacher at Mar d'Mar. Ruggles continued to direct the symphony after the music school closed. Charlotte then was a choir mistress at the First Baptist church and Ruggles was hired to conduct the YMCA orchestra and glee club. They also took private students.

In 1912 Ruggles moved to New York and began writing an opera based on the German play The Sunken Bell by Gerhart Hauptmann. It would prove to be a long process and due to both Ruggles's sluggish composing and anti-German sentiment (as a result of World War I), he never finished the opera. Ruggles continued to compose, supplementing his income by giving composition lessons. For his son's fourth birthday in 1919 he wrote Toys for soprano and piano; this was the first piece he wrote in his atonal, contrapuntal style. He continued to live and compose in New York until 1938, when he began teaching composition at the University of Miami until 1943. He then moved to a converted schoolhouse in Vermont where he spent his time revising compositions and painting. Known for his profanity, Ruggles was also anti-semitic; for example, he wrote to Henry Cowell about, "that filthy bunch of Juilliard Jews...cheap, without dignity, and with little or no talent," especially picking on Arthur Berger.[1] One-time friend Lou Harrison dissociated himself from Ruggles after the 1949 performance of Angels because of the older composer's racism, noting specifically a luncheon at Pennsylvania Station in New York at which Ruggles shouted anti-black and anti-semitic slurs.[2]

Ruggles died in Bennington, Vermont on October 24, 1971 due to old age and complications resulting from pneumonia.

Ruggles' compositional style was apparently trial and error. He sat at the piano and moved his fingers around, listened hard to the sounds... shouting out some of the lines. According to Ruggles himself, he never learned any music theory; either way he never analyzed other composers' pieces. Since the majority of his early works (before Toys) are destroyed, we can only speculate on their compositional style. Reviews suggest similarities to late 19th century Romanticism.

His dissonant, contrapuntal style was similar to Arnold Schoenberg's although he did not employ the same twelve tone system. He used a method similar to (and perhaps influenced by) Charles Seeger's dissonant counterpoint and generally avoided repeating a pitch class within 8 notes. He also never used sprechstimme in any of the songs he composed although he admired Schoenberg's Pierrot Lunaire. He only composed ten pieces due to his lengthy composition and revision process. He did, however, paint hundreds of paintings over the course of his lifetime and he was offered the opportunity to have one-man shows (which he turned down).

Sun-treader, his best known work, was scored for a large orchestra. It was inspired by the poem Pauline by Robert Browning, particularly the line Sun-treader, light and life be thine forever! The most common intervals in the piece are minor seconds, perfect fourths and augmented fourths. One group of pitch classes he uses is fourths in sequence where the respective notes are either 13 or 11 semitones apart; the other is three notes which are chromatically related (though often separated by an octave). Another distinctive feature of Sun-treader is the presence of 'waves', both in dynamics and pitch. Pitches will start low, then rise up to a climax, then descend again. Within the ascent (and descent) there are small descents (and ascents) leading to a self-similar (fractal) overall structure.

This article uses material from the article Carl Ruggles from the free encyclopedia Wikipedia and it is licensed under the GNU Free Documentation License.