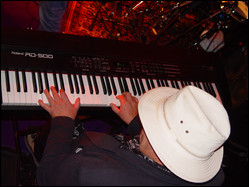 David Maxwell "Max" Middleton (born 4 August 1946, Amersham, Buckinghamshire, England). He is an English composer and keyboardist and was originally a docker on the Liverpool docks. Middleton is known for his work on the Fender Rhodes Electric piano, the Minimoog synthesiser and his percussive playing style of the Hohner Clavinet. He started on his professional music career by playing keyboards for Jeff Beck and is best known for his work on Beck's Blow by Blow.

After being introduced to Beck by bassist Clive Chaman during 1970, he played keyboards on the third Jeff Beck Group album Rough and Ready and the fourth Jeff Beck Group also known as "Orange album", in a line-up with Chaman, vocalist and guitarist Bobby Tench and drummer Cozy Powell. He went on to record Blow by Blow[1] and Wired with Jeff Beck before moving on to record and tour with Nazareth, Hummingbird, Streetwalkers, Chris Rea, Kate Bush, Annette Peacock, Rolling Stones guitarist Mick Taylor and singer-songwriter John Martyn.[2]

Middleton worked with Beck in the Jeff Beck Group line-up with vocalist and guitarist Bobby Tench, Clive Chaman and drummer Cozy Powell. He stayed with Beck as the power trio Beck, Bogert & Appice began to emerge as an established act before leaving to join Tench in Hummingbird[2] during 1976. Hummingbird released two successful albums with Middleton as keyboard player We Can't Go On Meeting Like This (1976), and Diamond Nights (1977), both produced by Ian "Sammy" Samwell.[3] He record Blow By Blow (1975) and Wired (1976).[2] By this time Middleton had become a sought after session musician, playing on albums such as the soundtrack to the film Sgt. Pepper's Lonely Hearts Club Band (1978)[4] and Nazareth's most successful album, Hair of the Dog (1975).

In 1979, he played keyboards on MorrisseyMullen's Cape Wrath and released Another Sleeper in the same year, an instrumental album with guitarist Robert Ahwai. This classic jazz-funk album was released along with Cape Wrath, on Fusion Harvest/EMI Records, the duo is supported by Richard Bailey, Kuma Harada, Darryl Lee Que, Steve Gregory, Bud Beadle, George Chisholm, Trevor Barber, Chris Rainbow and some backing vocalists.

In 1980 Middleton played was involved with the arrangements and played keyboards for Kate Bush's Never For Ever,[5] which had album and single success.[6] In the 1980s he was also involved with Chris Rea playing on On the Beach, Dancing with Strangers, The Road to Hell, Auberge and others. He produced Dick Morrissey's Souliloquy (1988) on which he played keyboards.[7] Middleton is credited as co writer of "The Loner" from Gary Moore's Wild Frontier (1987).[8] Middleton released the smooth jazz album Land of Secrets (2003) and became a member of Snowy White & The White Flames in 2005. In 2009 and 2010 he played with Mick Taylor band.

This article uses material from the article Max Middleton from the free encyclopedia Wikipedia and it is licensed under the GNU Free Documentation License.