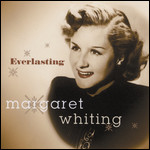 Margaret Whiting was born in Detroit, but her family moved to Los Angeles in 1929, when she was five years old. Her father, Richard, was a composer of popular songs, including the classics "Hooray for Hollywood", "Ain't We Got Fun?", and "On the Good Ship Lollipop". Her sister, Barbara Whiting, was an actress (Junior Miss, Beware, My Lovely) and singer.

An aunt, Margaret Young, was a singer and popular recording artist in the 1920s. In her childhood, Whiting's singing ability had already been noticed, and at the age of only seven she sang for singer-lyricist Johnny Mercer, with whom her father had collaborated on some popular songs ("Too Marvelous for Words"). In 1942, Mercer co-founded Capitol Records and signed Margaret to one of Capitol's first recording contracts.[1]

Whiting's first recordings were as featured singer with various orchestras:

In 1945, Whiting began to record under her own name, making such recordings as:

(these two from the movie "Centennial Summer")

Until the mid-1950s Whiting continued to record for Capitol, but as she ceased to record songs that charted as hits, she switched to Dot Records in 1957 and to Verve Records in 1960. Whiting returned to Capitol in the early 1960s and then signed with London Records in 1966. On London, Whiting landed one last major hit single in 1966, "The Wheel of Hurt", which hit #1 on the Easy Listening singles chart. Her final solo albums were made for Audiophile (1980, 1982, 1985) and DRG Records (1991). Her distinguished conductors and musical arrangers through the years included Frank DeVol, Russell Garcia, Johnny Mandel, Billy May, Marty Paich, Nelson Riddle, Pete Rugolo, and Paul Weston.

Margaret and Barbara Whiting starred as themselves in the situation comedy Those Whiting Girls. The show, produced by Desilu Productions, aired on CBS as a summer replacement series (in place of I Love Lucy) between July, 1955 and September, 1957.

In 1960, Whiting appeared as Vinnie Berkeley in one of the last episodes, "Martial Law", of the ABC/Warner Brothers western series, Colt .45. Paul Picerni was cast in the same segment as Duke Blaine.

This article uses material from the article Margaret Whiting from the free encyclopedia Wikipedia and it is licensed under the GNU Free Documentation License.