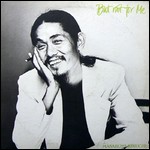 Masabumi Kikuchi was born in Tokyo in 1939, and lived his early life in World War II and post-war Japan. He studied music at the Tokyo Art College High School. After graduating, he joined Lionel Hampton's Japanese touring band. He died from a subdural hematoma on 6 July 2015 at a hospital in Manhasset, New York. At the time of his death, he lived in Manhattan, New York City.[2]

With Tethered Moon (Trio with Paul Motian and Gary Peacock)

In the late 1970s, Kikuchi lived in New York City and rented a loft apartment on W. 20th Street. The large apartment, over 1700 square feet, was in a formerly commercial building adapted to artists spaces and mixed studio and apartment space. His space was filled with musical instruments and recording equipment; a creative work space as well as living space. In late 1977, a health spa equipment sales business moved into the floor above Kikuchi's studio. A series of damaging water leaks, noise, and eventually large scale building renovations began. These leaks and activities severely interfered with his work and daily living; Eventually Kikuchi sued his landlord asserting that the combined events and activities breached the covenant of quiet enjoyment of his apartment. Importantly, he also claimed that the construction work effectively excluded his use of a generous swath of the loft apartment, that is he was constructively evicted by the landlord's acts and failure to act (related to the upstairs tenant). Despite the massive disruptions, he continued living in the apartment during the legal dispute. At common law, an essential element of claiming constructive eviction is the tenant's moving out; The logic of the common law rule is rooted in proof: the landlord's actions must be so severe and materially impact the tenant that no one would continue to stay there under the circumstances.

The case was finally decided by the N.Y. Appellate Division in 1988. The Court's ruling in favor of Kikuchi established the notion of partial constructive eviction; that is, a partial exclusion from the quiet use and enjoyment of the property. The rule established in this case entitled a partially constructively evicted tenant to a pro rata rent reduction in proportion to the portion of the property they were unable to use. Importantly, the court held that leaving the premises was not required under this new concept. This rule has not been widely adopted in the United States and is a minority rule. The case, 528 N.Y.S.2d 554 (App. Div. 1988) is featured in contemporary property law case books to illustrate the concept of partial constructive eviction.

This article uses material from the article Masabumi Kikuchi from the free encyclopedia Wikipedia and it is licensed under the GNU Free Documentation License.