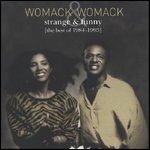 Cecil Dale Womack (September 25, 1947 February 1, 2013) was an American R&B singer, songwriter and record producer. He was one of the musical Womack brothers, and had success both as a songwriter and recording artist, notably with his wife Linda as Womack and Womack. In later years he took the name Zekuuba Zekkariyas.

Cecil Womack was born in Cleveland, Ohio. He and his brothers Bobby, Harry, Friendly and Curtis, were a gospel group appearing on the gospel circuit in the mid 50s where they were seen by Sam Cooke of the Soul Stirrers. As Cooke's protégés they changed their name to The Valentinos and in 1961 began to sing and record for secular audiences.[1] The Valentinos had hit records with "Lookin' for a Love" and "It's All Over Now", the latter being covered by The Rolling Stones. Cooke's death at a L.A. motel in December 1964,had dramatic consequences for the Womack Brothers as SAR folded and Bobby Womack, who was now married to Sam Cooke's widow, Barbara, left the group for a solo career. The Valentinos briefly disbanded before regrouping as a quartet in 1966, signing with Chess Records where they recorded the Northern Soul hit, "Sweeter than the Day Before" written by Cecil Womack and Mary Wells. However, the group got dropped from Chess in 1968 after only two singles and Cecil Womack who had married former Motown artiste Mary Wells decided to leave the Valentinos. The remaining trio of Harry, Curtis and Friendly Jr. signed with Jubilee Records where they recorded the Cecil-composed "Two Lovers History" and "Tired Of Being Nobody" before being dropped in 1970[2]

As the 1960s progressed Cecil Womack secured a role away from performing as a songwriter and producer. As husband of Mary Wells he was well placed to provide several R & B chart successes for her including "The Doctor", "Dig The Way I Feel" and "Never Give A Man The World" on which he backed his wife on vocals, all released on Jubilee Records.[3] Womack's later songwriting credits include "Love TKO" a major hit for Teddy Pendergrass, "I Just Want To Satisfy You" for The O'Jays, "Love Symphony" for Patti LaBelle, and "New Day" for George Benson.[4]

In 1983, Cecil and his wife Linda, who was Sam Cooke's daughter, began performing and recording together as Womack & Womack, and released a successful album, Love Wars on Elektra Records. The title track from the album was a no.14 hit in the UK, and the song "Baby I'm Scared Of You" was a minor hit on the Billboard R&B chart in the US. In 1988, their single "Teardrops", taken from their fourth album Conscience, became a major international hit reportedly selling more than 10 million copies worldwide. It reached no.3 in the UK, and no.1 in the Netherlands, Australia, and New Zealand, though it did not chart in the US.[5][6]

Mary Wells recorded the Valentinos "Two Lovers' History" in 1968. The Womack & Womack song "Love Wars" was covered by The Beautiful Southfor the 1990 compilation Rubáiyát.Eric Clapton, Elton John, K.D. Lang and The Sugababes are among many artists who recorded "Lead Me On". His best known song "Love T.K.O." has been recorded by many artists, including Boz Scaggs, Teddy Pendergrass, Bette Midler and Michael McDonald. "Teardrops" has been covered by Joss Stone. [9]

Womack became the second husband of Motown singer Mary Wells in 1967;[10] they divorced in 1977. He also had a son born in 1966 from a prior relationship.

Cecil later married Linda Cooke, the daughter of Sam Cooke. This created an interesting family tree because Cecil's brother Bobby Womack had married Sam Cooke's widow Barbara Campbell in 1965, after Cooke's death.[11] Cecil and Linda had seven children together, and had homes in Africa and Thailand. After 1994, Womack was known professionally and personally by the name Zekuuba Zekkariyas.

Zekuuba Zekkariyas spent his final years traveling the world with his wife and children, and using his time to explore his African heritage, spirituality and knowledge of the continent as well as making music. He died of unknown causes in South Africa on February 1, 2013.[12]

This article uses material from the article Cecil Womack from the free encyclopedia Wikipedia and it is licensed under the GNU Free Documentation License.