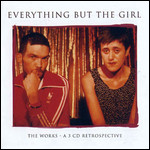 Tracey Anne Thorn (born 26 September 1962) is an English pop singer and songwriter. She is best known as being one half of the duo Everything but the Girl.

The youngest of three children [1]Thorn was born in Brookmans Park, Hatfield, Hertfordshire. She grew up in Hatfield and studied English at the University of Hull, where she graduated in 1984 with First Class Honours. She later took an MA degree at Birkbeck College, University of London.

After 28 years as a couple, Thorn and her partner Ben Watt married in 2009 at Chelsea Register Office.[2] They live in Hampstead, North London.[3] The couple have twin daughters Alfie and Jean, born in 1998, and a son Blake born in 2001.

Thorn then joined Marine Girls playing guitar and sharing vocals. The band released two albums (Beach Party in 1981 and Lazy Ways in 1983) and three singles. The group disbanded when Thorn decided to concentrate on her studies at Hull, and on Everything but the Girl.

Thorn met Ben Watt at the University of Hull where they were both students, and both signed as solo artists to Cherry Red Records. Their first album together was Eden, released in 1984. Everything But The Girl released a body of work that spanned two decades. Their biggest chart success came in 1995, when DJ Todd Terry remixed a song from their Amplified Heart album. "Missing" became a huge hit all over the world, especially in the U.S., where it reached number two in the Billboard Hot 100.

Everything But The Girl have been on extended hiatus since 2000, while Ben Watt has concentrated on his DJ work, and Thorn has been a full-time parent and, most recently, writing and recording her solo material.

They released compilation albums in 2002 and 2005, and Watt has played on some filmed performances of Thorn's solo work and on her 2011 recording of the xx's Night Time.[6]

Thorn's first solo work was a mini-album entitled A Distant Shore (1982). A re-recorded version of the track "Plain Sailing" was released as a single, and was included on the Pillows & Prayers Cherry Red records compilation album.

In the 1980s, Thorn contributed guest vocals and backing vocals for The Style Council on the track "Paris Match" (from the album Café Bleu), The Go-Betweens on their track Head Full of Steam, Working Week on the single "Venceremos (We Will Win)", Lloyd Cole and the Commotions on the track "Big Snake", and Adam F on "The Tree Knows Everything", from Colours.

In the 1990s, she collaborated with Massive Attack on several projects, including the soundtrack for the motion picture Batman Forever where she contributed with "The Hunter Gets Captured by the Game". Their first project together was the song "Protection" from the album by Massive Attack of the same name. She also sings on the track "Better Things".

Just prior to her return to recording in 2007, Thorn contributed vocals to the song "Damage" by the band Tiefschwarz on the album Eat Books.

In March 2007, Tracey Thorn released her second solo album Out of the Woods on Virgin Records (Worldwide) and on Astralwerks (USA). Thorn cited her peers Terry Hall and Siouxsie Sioux in the song "Hands Up to the Ceiling". The record includes contributions from Cagedbaby, Ewan Pearson, Charles Webster, Sasse, Darshan Jesrani, Martin Wheeler and Alex Santos. Thorn's MySpace page includes several mixes of the single and the music video.

In 2008, Thorn collaborated with the Hungarian acoustic downtempo group The Unbending Trees on their single "Overture", which also featured on their album Chemically Happy (Is The New Sad), released by her partner Ben Watt.

Thorn's third solo album Love and Its Opposite was released in May 2010 on Ben Watt's Strange Feeling Records in the UK, and on Merge Records in the US. Recorded in London and Berlin and produced by Ewan Pearson, it contained eight new songs and two cover versions, "Come on Home to Me" by Lee Hazlewood, and "You Are a Lover" by The Unbending Trees.

This article uses material from the article Tracey Thorn from the free encyclopedia Wikipedia and it is licensed under the GNU Free Documentation License.