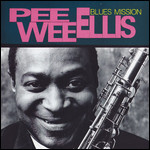 Alfred "Pee Wee" Ellis (born April 21, 1941) is an American saxophonist, composer and arranger. He was an important member of James Brown's band in the 1960s and appeared on many of Brown's most notable recordings. He also worked closely with Van Morrison.

In later years, he became a resident of England, living in the town of Frome in the county of Somerset.[1]

Born in Bradenton, Florida, Ellis moved with his family to Lubbock, Texas in 1949, where he was given his nickname "Pee Wee". He gave his first public performance in 1954 at Dunbar Junior High School. In 1955 he moved with his family to Rochester, New York. While attending Madison High School he played professionally with jazz musicians including Ron Carter and Chuck Mangione. In 1957 he moved to New York City, where he attended Manhattan School of Music and had regular lessons with Sonny Rollins. In 1960 he moved back to Florida working as a bandleader, musical director and writer.

In the late 1980s Pee Wee regrouped with some musicians he worked with during his time with James Brown to form the JB Horns. With Fred Wesley and Maceo Parker he recorded a number of albums that defined a distinctive brand of jazz-funk. The group also toured in Europe.

Ellis's composition "The Chicken" was made famous by the electric bass player Jaco Pastorius, who recorded it on his album The Birthday Concert, as well as Invitation.

In 1995, showing the diversity of his musical interests and talents, Ellis played tenor sax and arranged the horns for the album Worotan, by Mali's Oumou Sangare, the so-called "Songbird of Wassoulou".

In 2009 Pee Wee toured a tribute to James Brown called "Still Black Still Proud". He performed this with special guests Mahotella Queens and Ghanaian born rapper Ty at the Frome Festival on July 12, 2009, and again in a series of concerts in Europe during April and May 2010.

In July 2010 Pee Wee participated in Brass: Durham International Festival 2010. This involved Ellis working with a selection of local youth ensembles and culminated in a concert at Bishop Auckland Town Hall on Monday 5 July. Later that week, on Thursday 8 July, Pee Wee took to the stage as a special guest of Maceo Parker and his band. The concert was held at the Gala Theatre Durham and Ellis linked up with his old band friend Maceo to perform 2 songs, playing his signature baritone sax next to Maceo's tenor sax. In August 2010 he played at the 27th Brecon Jazz Festival. Pee Wee is scheduled to join Maceo and Fred Wesley on Jam Cruise in January 2011.

With The JB Horns

This article uses material from the article Alfred "Pee Wee" Ellis from the free encyclopedia Wikipedia and it is licensed under the GNU Free Documentation License.

Wolfgang Amadeus Mozart Adagio aus dem Klarinettenkonzert A-Dur KV 622
Update Required To play the media you will need to either update your browser to a recent version or update your Flash plugin.