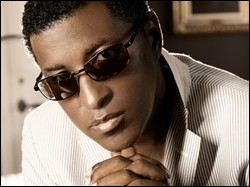 Kenneth "Babyface" Edmonds (born April 10, 1959) is an American R&B musician, singersongwriter and record producer. He has written and produced over 26 No. 1 R&B hits throughout his career. He has won 10 Grammy Awards.

Kenneth Edmonds was born on April 10, 1959, in Indianapolis, Indiana,[1][2] to Marvin and Barbara Edmonds. Barbara was a pharmaceutical plant manager. Edmonds, who is the fifth of six brothers (including future After 7 band members Melvin and Kevon Edmonds, the latter of whom went on to have a modestly successful solo career), attended North Central High School in Indianapolis, Indiana, and as a shy youth, wrote songs to express his emotions.[3] When he was in eighth grade, Edmonds' father died of lung cancer, leaving his mother to raise her sons alone.[3] At this stage, Edmonds became determined to have a career in music.[1]

Edmonds later played with funk performer Bootsy Collins, who tagged him "Babyface" because of his cute face while he was still a teen. He also performed in the group Manchild (which had a 1976 hit "Especially for You" with band member Daryl Simmons), as he was a guitarist for the band. Then, as a keyboardist in the light-funk and R&B group The Deele (which also included drummer Antonio "L.A." Reid, with whom he would later form a successful writing and producing partnership). One of his first major credits as a songwriter for outside artists came when he wrote the tune "Slow-Jam" for the R&B band Midnight Star in 1983. The tune was on Midnight Star's double-platinum No Parking on the Dance Floor album, and while it never hit the charts, the song is still played on quiet storm radio stations. Babyface remained in The Deele until 1988, when both he and Reid left the group.

His album Playlist consists of eight cover songs and two original works. It was released on September 18, 2007. It was the first album on the newly re-launched Mercury Records label.[4]

In the late 1980s, he contributed to the creation of new jack swing, writing and producing music for the likes of Bobby Brown, Karyn White, Pebbles, Paula Abdul and Sheena Easton.

In 1989, Edmonds co-founded LaFace Records with Reid. Three of the label's early artists TLC, Usher, and Toni Braxton were successful, the former becoming one of the best selling female groups in music history. Braxton's eponymous 1993 debut album went on to sell over eight million copies, and earned her the 1994 Grammy Award Best New Artist. TLC's first two albums on LaFace1992's Ooooooohhh... On the TLC Tip and 1994's CrazySexyCoolcombined to sell more than 15 million copies in the U.S. CrazySexyCool won the 1996 Grammy Award for Best R&B album.

Babyface helped form the popular late-90s R&B group Az Yet. Edmonds also helped to mold and work closely with some of his former wife Tracey Edmonds acts such as Jon B and producer Jon-John Robinson.

Edmonds works with many successful performers in contemporary music. Im Your Baby Tonight, produced for Whitney Houston, was his first No. 1 Top 40 hit in the US. He also wrote and produced Boyz II Men's "End of the Road" and "I'll Make Love to You," both of which established records for the longest stay at No. 1 on the Billboard Hot 100 chart. He co-wrote, co-produced, and provided backing vocals on Madonna's 1994 Bedtime Stories, which featured the 7-week No. 1 hit "Take a Bow," and shared billing with Eric Clapton on the chart-topping Grammy winner "Change the World" from the Phenomenon soundtrack. He also wrote and produced the No. 1 hit "Exhale (Shoop Shoop)" for Whitney Houston as well as the rest of the critically acclaimed 10 million selling Waiting to Exhale soundtrack in 1995, which spawned additional hits for Houston, Brandy and Mary J. Blige.

Babyface was in the studio for about two years with Ashanti to produce her album The Declaration.[6]

He worked on the Lil Wayne album Tha Carter III, on the Kanye West-produced "Comfortable." He also worked with R&B singer Monica for her sixth studio album Still Standing.

In 2013, Babyface served as producer for Ariana Grande's debut album Yours Truly, producing majority of her songs, including her second single, "Baby I".

In the mid-1990s, Edmonds and his then wife Tracey Edmonds expanded into the business of motion pictures, setting up Edmonds Entertainment Group and producing films such as Soul Food (1997), Josie and the Pussycats (2001), and also the soundtrack for the film The Prince of Egypt, which included contributions from numerous artists, including Mariah Carey and Whitney Houston. They are the current executive producers of the hit BET reality series College Hill. Edmonds also worked with David Foster to compose "The Power of the Dream," the official song of the 1996 Summer Olympics, performed by superstar Céline Dion. Linda Thompson provided the lyrics.

Edmonds founded his record label Soda Pop Records in 2009. Since founding the label he has signed R&B icons K-Ci & JoJo, releasing their first album for the label entitled My Brother's Keeper. In 2013 Babyface secured a distribution deal with E1 Music for the label.

In 1990, Babyface met Tracey Edmonds when she auditioned for the music video "Whip Appeal". They married on September 5, 1992 and they have two sons, Brandon and Dylan Michael. In January 7, 2005, Tracey filed for divorce in Los Angeles County Superior Court, citing irreconcilable differences. In October 2005, Babyface and Tracey finally announced that they were ending their marriage of thirteen years.

On December 2, 2012, Babyface worked at a local Nathan's for charity. All proceeds went to Toys for Tots.

In 1999, a 25-mile (40-km) stretch of Interstate 65 that runs through Indianapolis was renamed Kenneth "Babyface" Edmonds Highway.[8]

On August 30, 2006, Babyface was honored as a BMI Icon at the 6th annual BMI Urban Awards.[9] Throughout his career, Babyface has won the BMI Pop Songwriter of the Year trophy seven times and a total of 51 BMI Awards, which includes Song of the Year for his Toni Braxton hit, "Breathe Again," in 1994.[10]

This article uses material from the article Babyface (musician) from the free encyclopedia Wikipedia and it is licensed under the GNU Free Documentation License.