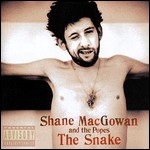 Shane Patrick Lysaght MacGowan (born 25 December 1957) is an Irish-British musician and singer-songwriter, best known as the lead singer and songwriter of Celtic punk band the Pogues. He was also a member of the Nipple Erectors and Shane MacGowan and the Popes, as well as producing his own solo material and working on collaborations with artists such as Kirsty MacColl, Joe Strummer, Nick Cave, Steve Earle, and Sinéad O'Connor.

MacGowan was born on Christmas Day in Pembury, Kent, England, in 1957,[1] to Irish parents. MacGowan spent his early childhood in County Tipperary, Ireland, before his family moved back to England when he was six and a half. He has lived in many parts of the south-east, including Brighton and London.

MacGowan's father, Maurice, worked for a department store. MacGowan's mother, Therese, was a singer and traditional Irish dancer, and had worked as a model in Dublin. In 1971, after attending Holmewood House School at Langton Green, Tunbridge Wells, MacGowan earned a literature scholarship and was accepted into Westminster School. He was found in possession of drugs and was expelled in his second year.[2]

MacGowan got his first taste of fame in 1976 at a concert by British punk band The Clash, when his earlobe was damaged by Jane Crockford, later to be a member of Mo-dettes. A photographer snapped a picture of him covered in blood and it made the papers, with the headline "Cannibalism at Clash Gig".[3][4][5] Shortly after this, he formed his own punk rock band, The Nipple Erectors, later renamed "The Nips".

MacGowan drew upon his Irish heritage when founding The Pogues and changed his early punk style for a more traditional sound with tutoring from his extended family. Many of his songs are influenced by Irish nationalism, Irish history, the experiences of the Irish in London and the United States, and London life in general. These influences are documented in the biography, Rake at the Gates of Hell: Shane MacGowan in Context. MacGowan has often cited the 19th-century Irish poet James Clarence Mangan and playwright Brendan Behan as influences.

Between 1985 and 1987, he co-wrote "Fairytale of New York", which he performed with Kirsty MacColl. In the coming years MacGowan and The Pogues released several albums.

In 1997, MacGowan appeared on Lou Reed's "Perfect Day", covered by numerous artists in aid of Children in Need. It was the UK's number one single for three weeks, in two separate spells. Selling over a million copies, the record contributed £2,125,000 to the charity's highest fundraising total in six years.[6]

After The Pogues threw MacGowan out for unprofessional behaviour, he formed a new band, Shane MacGowan and The Popes, recording two studio albums, a live album, three tracks on The Popes Outlaw Heaven (2010) and a live DVD, and touring internationally.

From December 2003 up to May 2005, Shane MacGowan & The Popes toured extensively in UK/Ireland/Europe.[7]

In 2010, MacGowan offered a piece of unusual art to the ISPCC (Irish Society for the Prevention of Cruelty to Children) to auction off to support their services to children.[8] It ended up fetching €1,602 for the charity.[9]

The Pogues and MacGowan reformed for a sell-out tour in 2001 and each year from 2004 to 2009 for further tours, including headline slots at Guilfest in England and the Azkena Rock Festival in Basque Country,Spain.

In May 2005, MacGowan rejoined The Pogues permanently.[7]

In 2005, The Pogues re-released "Fairytale of New York" to raise funds for the Justice For Kirsty Campaign and Crisis at Christmas. The single was the best-selling festive-themed single of 2005, reaching number 2 in the UK Charts.

In 2006, he was voted 50th in the NME Rock Heroes List.[10][11] He has been seen many times with The Libertines and Babyshambles singer Pete Doherty. MacGowan has joined Babyshambles on stage. Other famous friends include Johnny Depp, who starred in the video for "That Woman's Got Me Drinking", and Joe Strummer, who referred to MacGowan as "one of the best writers of the century" in an interview featured on the videogram release "Live at the Town And Country Club" from 1988. Strummer occasionally joined MacGowan and The Pogues on stage (and briefly replaced MacGowan as lead singer after his sacking from the band).

MacGowan is the subject of several books and paintings. In 2000, Tim Bradford used the title Is Shane MacGowan Still Alive? for a humorous book about Ireland and Irish culture.[12] Shaman Shane — The Wounded Healer by Stephan Martin brands Shane as a latter-day London-Irish spirit-raiser and exorcist. This commentary is found in the book Myth of Return — The Paintings of Brian Whelan and Collected Commentaries. London Irish artist Brian Whelan paints Shane (for example Boy From The County Hell), his works are featured on Shane's official website, and is also the illustrator of The Popes Outlaw Heaven cover.[13]

The Pogues' last performance on British soil occurred on 5 July 2014 at the British Summer Time festival in London's Hyde Park.[14]

About his future with The Pogues, in a 24 December 2015 interview with Vice Magazine,[15] when the interviewer asked whether the band were still active, Shane MacGowan said: "We're not, no," saying that, since their 2001 reunion happened, "I went back with [The] Pogues and we grew to hate each other all over again," adding: "I don't hate the band at all — they're friends. I like them a lot. We were friends for years before we joined the band. We just got a bit sick of each other. We're friends as long as we don't tour together. I've done a hell of a lot of touring. I've had enough of it.»[14]

In 2010, MacGowan played impromptu shows in Dublin with a new five-piece backing band named The Shane Gang, including In Tua Nua rhythm section Paul Byrne (drums) and Jack Dublin (bass), with manager Joey Cashman on whistle. In November 2010, this line up fled from Ireland to the Spanish island of Lanzarote to record a new album.[16][17]

MacGowan also worked as a lyricist on How to Train Your Dragon 2 for the song For the Dancing and the Dreaming.

MacGowan is the older brother of Siobhan MacGowan, a journalist, writer and songwriter, who released her album Chariot in 1998, and published a children's novel, Etain's Dream.

In 2001, Sinéad O'Connor reported MacGowan to the police in London for drug possession – in what she said was an attempt to discourage him from using heroin.[20] At first furious, MacGowan later expressed gratitude towards O'Connor and claimed that the incident helped him kick his heroin habit.[21]

MacGowan has suffered physically from years of binge drinking. He often performs while intoxicated and has been impaired in interviews. In 2004, on the BBC TV political magazine programme This Week he gave incoherent and slurred answers to questions from Janet Street-Porter about the public smoking ban in Ireland.[22]

MacGowan has long been known for having very bad teeth. He lost the last of his natural teeth in about 2008. In 2015, he had 28 new dentures — with one gold tooth that he insisted on — on a titanium frame fitted in a nine-hour procedure which was the subject of an hour-long television programme. The dental surgeon who carried out the procedure, commented that MacGowan had recorded most of his great works while he still had some teeth: "We've effectively re-tuned his instrument and that will be an ongoing process."[14][23]

In 2001, MacGowan coauthored the autobiographical book A Drink with Shane MacGowan with Victoria Mary Clarke.

In 2008, MacGowan appeared in an episode of Fair City which was shown on 28 December 2008.[24] In 2009, he starred in the RTÉ reality show Victoria and Shane Grow Their Own, as he and Victoria Mary Clarke endeavoured to grow their own food in their own garden.

In the summer of 2015, MacGowan fell as he was leaving a Dublin studio, fracturing his pelvis. MacGowan has been using a wheelchair since the accident.[25][26]

"It was a fall and I fell the wrong way," he stated in an interview with Vice's Leonie Cooper. "I broke my pelvis, which is the worst thing you can do. I'm lame in one leg, I can't walk around the room without a crutch. I am getting better, but it's taking a very long time. It's the longest I've ever taken to recover from an injury. And I've had a lot of injuries."[27]

This article uses material from the article Shane MacGowan from the free encyclopedia Wikipedia and it is licensed under the GNU Free Documentation License.