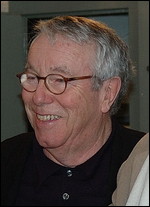 Van Dijk studied solo piano at the Amsterdam Conservatorium. He played with Pim Jacobs and Pieter van Vollenhoven under the name De Gevleugelde Vrienden ("The Winged Friends"). In September 2005, he played at a charity concert at the Concertgebouw to raise funds for New Orleans after the city was hit by Hurricane Katrina.[1] For his accomplishments as a musician, he has been awarded the honorary title of Knight of the Order of the Netherlands Lion.

This article uses material from the article Louis van Dijk from the free encyclopedia Wikipedia and it is licensed under the GNU Free Documentation License.

Ludwig van Beethoven Ouvertüre zu Goethes Trauerspiel "Egmont" op. 84
Update Required To play the media you will need to either update your browser to a recent version or update your Flash plugin.