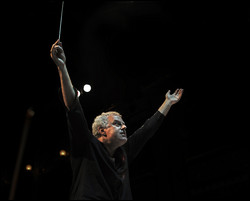 Daniel Oren was born in Israel to a Muslim father and a Jewish mother. When he was 13 years old, Oren was chosen by Leonard Bernstein to perform the boy solo part in Chichester Psalms. In 1975 he won first prize in the first Herbert von Karajan Conducting Competition.[1]

Oren has conducted opera productions all over Europe and the United States. Since 2007, he is the artistic director of the Teatro Verdi opera company in Salerno, Italy. Oren conducts at the Royal Opera House Covent Garden, the Metropolitan in New York, the Arena in Verona, the Vienna Staatsoper, the Bastille in Paris and the opera houses of Rome, Trieste, Genoa, Florence, Parma, Turin, Venice, Buenos Aires, San Francisco, Tokyo, Huston, Washington and many others. He also leads many symphonic concerts with orchestras such as the Santa Cecilia in Rome and the orchestras of Florence, Koln, Stuttgart, Frankfurt and the Berlin Philharmonic.

This article uses material from the article Daniel Oren from the free encyclopedia Wikipedia and it is licensed under the GNU Free Documentation License.