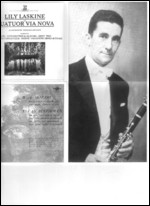 Born in Rouen, France, he studied at the conservatoire of Caen with Fernand Blachet, and at the Conservatoire de Paris with Auguste Périer and Fernand Oubradous, where he graduated in 1939. He is considered an exponent of the traditional French clarinet school with a clear and transparent sound.

He gave the first performance of the famously difficult clarinet concerto by Jean Françaix of which, in 1976, in his book "Clarinet",[1] Jack Brymer wrote:

"A work for the future, possibly, when the instrument has developed further or the human hand has changed. At present, its roulades in the key of B major are beyond almost any player; but the work is a worthwhile challenge, and the A-clarinet would probably provide the answer."

Additionally, he gave the premieres of works by Jean Rivier, Roger Calmel, Bernard Beugnot and others.

A clarinet competition was named after him : "Jacques Lancelot International Clarinet Competition".

He has a considerable discography on Erato and King Records.

He was named an honorary member of the International Clarinet Association.[2]

This article uses material from the article Jacques Lancelot from the free encyclopedia Wikipedia and it is licensed under the GNU Free Documentation License.

Robert Kahn Allegro energico aus der Sonate für Violoncello und Klavier Nr.1
Update Required To play the media you will need to either update your browser to a recent version or update your Flash plugin.