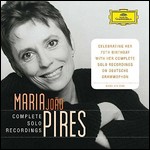 Pires was born in Lisbon, Portugal. Her first recital was at the age of five, and at the age of seven she was already playing Mozart piano concertos publicly. Two years later she received Portugal's top prize for young musicians. In the following years, she studied with Campos Coelho at the Lisbon Conservatory, taking courses in composition, theory, and history of music. She continued her studies in Germany, first in the Musikakademie of Munich with Rosl Schmidt and then in Hanover with Karl Engel.[1]

International fame came in 1970, when she won the Beethoven Bicentennial Competition in Brussels. Subsequently she performed with major orchestras in Europe, America, Canada, Israel and Japan, interpreting works by Bach, Beethoven, Schumann, Schubert, Mozart, Brahms, Chopin and other classical and romantic composers.

Her professionalism achieved worldwide recognition when a film (from 1999) was drawn to the attention of the press and went viral in 2013. At the start of a lunchtime concert in Amsterdam, she realised that she had rehearsed for a different Mozart concerto from the one the orchestra had started playing; quickly recovering, she played the concerto from memory.[2]

Pires performed at the BBC Proms in 2010. In an interview beforehand, she said that after 60 years of recitals and concerts she had cut back her performances but was non-committal about retirement.[3]

From 2012 to 2016, she was a Master in Residence at the Queen Elisabeth Music Chapel in Waterloo, Belgium, where she gave piano lessons and master classes to young talented pianists from all over the world. To foster young musicians, she launched the Partitura Project.

Pires performs as a solo artist and in chamber music. Her many successful recordings include performances of the Moonlight and other sonatas by Beethoven, Le Voyage Magnifique (the complete impromptus of Schubert), nocturnes and other works by Chopin, and Mozart trios with Augustin Dumay (violin) and Jian Wang (cello).

Gramophone selected her recordings of the Chopin nocturnes as the best version available: "I have no hesitation in declaring Maria João Pires—a pianist without a trace of narcissism—among the most eloquent master-musicians of our time." (Bryce Morrison).[6]

Another of her acclaimed recordings is Mozart: The Piano Sonatas. According to the Penguin Guide, "Maria João Pires is a stylist and a fine Mozartian. She is always refined yet never wanting in classical feeling, and she has a vital imagination. She strikes an ideal balance between poise and expressive sensibility, conveying a sense of spontaneity in everything she does."

In 2006 she moved to Lauro de Freitas—a town near Salvador, Brazil—and continued performing. At the time of her move, she commented that she had suffered much adverse publicity in Portugal due to her Belgais Centre project to help tackle the significant problem of underprivileged children, a project that the Portuguese Government helped to fund but publicly shied away from.[7] The centre continued to operate at her farm in Portugal[5] and she subsequently started similar projects in Brazil.[3]

This article uses material from the article Maria João Pires from the free encyclopedia Wikipedia and it is licensed under the GNU Free Documentation License.