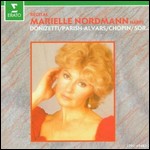 born on 24/1/1941 in Montpellier, Languedoc-Roussillon, France

Marielle Nordmann was a pupil of Lily Laskine at the Conservatoire de Paris where she won a first prize in 1958. Between 1960 and 1978, she led the Nordmann Trio with flautist André Guilbert and cellist Renaud Fontanarosa.

She gives master classes for children, organizes competitions in France and abroad, and created a foundation helping young musicians. She taught in Argentina between 1989 and 1999.

She co-founded the Lili Laskine competition in 1993 and the "Journées de la harpe" at Arles in 1995.

This article uses material from the article Marielle Nordmann from the free encyclopedia Wikipedia and it is licensed under the GNU Free Documentation License.

Gabriel Fauré "Masques et Bergamasques" Suite op.112
Update Required To play the media you will need to either update your browser to a recent version or update your Flash plugin.