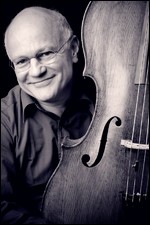 Jaap ter Linden (born 10 April 1947, in Rotterdam) is a Dutch cellist, viol player and conductor. He specialises in performance of baroque and classical music on authentic instruments.

He teaches at the Royal Conservatory of The Hague, at the Amsterdam Conservatory and at the Hochschule für Alte Musik in Würzburg.

This article uses material from the article Jaap ter Linden from the free encyclopedia Wikipedia and it is licensed under the GNU Free Documentation License.