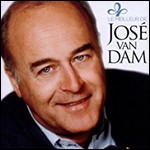 At the age of 17, he entered the Brussels Royal Conservatory and studied with Frederic Anspach. A year later, he graduated with diplomas and first prizes in voice and opera performance. He made his opera début as the music teacher Don Basilio in Gioacchino Rossini’s Il Barbiere di Siviglia at the Paris Opera in 1961, and remained in the company until 1965, when he sang his first major role, Escamillo from Bizet's Carmen. He then sang for two seasons at Geneva, La Scala, Covent Garden, and in Paris. At Geneva, Van Dam sang in the première of Milhaud's La mère coupable in 1966. Lorin Maazel heard van Dam and invited him to record Ravel’s L’heure espagnole with him for Deutsche Grammophon. In 1967, Maazel asked him to join the Deutsche Oper in Berlin.

Van Dam is also a concert, oratorio, and Lieder singer and has won international awards for his performances on stage and in recordings. Berlin conferred on him the title of "Kammersänger" in 1974, and the same year he received the German Music Critics’ Prize. Other awards include the Gold Medal of the Belgian Press (1976), Grand Prix de l’Académie française du Disque (1979), Orphée d’Or de l’Académie Lyrique Française (1980), the European Critics’ Prize, (1985), Diapason d’Or and Prix de la Nouvelle Académie du Disque (1993), and the Orphée d’Or de l’Académie du Disque Lyrique (1994).

In August 1998, His Majesty King Albert II of Belgium made van Dam a baron, recognizing him as one of the finest classical singers. On 4 December 1999 van Dam was one of the performers at the marriage of Belgium's Crown Prince Philippe and Mathilde d'Udekem d'Acoz.

One of the bass-baritone's greatest successes was as the title role in Olivier Messiaen's Saint François d'Assise. The world-premiere was recorded under Seiji Ozawa (1983), as was the Salzburg production, under Kent Nagano (1998).

This article uses material from the article José van Dam from the free encyclopedia Wikipedia and it is licensed under the GNU Free Documentation License.