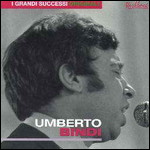 Umberto Bindi (12 May 1932 - 24 May 2002) was an Italian singer-songwriter. He is especially known for the popular song he co-wrote with Gino Paoli,Il Mio Mondo ("You're My World"), which he recorded in Italian in 1963. It was later performed by singers in English and other languages.

Bindi was born in Bogliasco (Province of Genoa), Italy, and was classically trained. He wrote his first song, "T'ho perduto" ("I've Lost You"), in 1950. He made his professional debut in Italian popular music in 1959 with his composition, Arrivederci. The song was recorded by Marino Barreto Jr., and soon became the best-selling single in Italy for that year.[1] A cover version was recorded by Chet Baker in 1960 for the Italian film, Urlatori alla sbarra.

Bindi's first album, Umberto Bindi e le sue canzoni, was released in 1960. Bindi also wrote and recorded a number of songs that would make him known to the larger public in Italy. A few of these became classic hits there, covered many times: besides "Arrivederci", Il Nostro Concerto ("Our Concert"), 1960, number 2 on Italy's best-selling singles list for the year,[2] "Riviera" (1961), and "Il Mio Mondo". The latter was recorded in English in 1964 by the British pop singer Cilla Black, and remained number 1 on the UK Singles Chart for five weeks.[3] Bindi's "Il Nostro Concerto" spent one week in the UK Singles Chart in November 1960, at number 47.[4]

He also wrote the music of La musica è finita (1967), another Italian classic, made famous by Ornella Vanoni and Mina.

However, his singing career in Italy stalled, and he and music critics attributed this to the Italian media's discomfort in the 1960s with Bindi's homosexuality. The singer nevertheless made a few concert appearances.

Bindi died at a Rome hospital from heart disease at the age of 70.

This article uses material from the article Umberto Bindi from the free encyclopedia Wikipedia and it is licensed under the GNU Free Documentation License.

Josef Suk Dumka aus der Suite op.21
Update Required To play the media you will need to either update your browser to a recent version or update your Flash plugin.