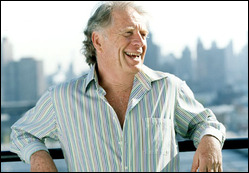 Christopher Percy Gordon "Chris" Blackwell (born 22 June 1937) is an English businessman and former record producer, and the founder of Island Records, which has been called "one of Britain's great independent labels".[1] According to the Rock and Roll Hall of Fame, to which Blackwell was inducted in 2001, he is the single person most responsible for turning the world on to reggae music.[2]

Forming Island Records in Jamaica on 22 May 1959 aged 22, Blackwell was amongst the first to record the Jamaican popular music that eventually became known as ska. Returning to Britain in 1962, he sold records from the back of his car to the Jamaican community.[1]

Backed by Stanley Borden from RKO Entertainment, Blackwell's business and reach grew substantially, and he went on to forge the careers of Bob Marley, Grace Jones and U2 amongst many other diverse high-profile acts. He has produced many seminal albums, including Marley's Catch A Fire and Uprising.[3]

Blackwell was born in Westminster, London.[4] Blackwell's father, Joseph, who was Irish, was related to the founder of Crosse & Blackwell, purveyors of jarred foods and relishes, and had some residual wealth.[1] He became a Major in the Jamaican Regiment.[3]

Blackwell's mother, the former Blanche Lindo, was born in Costa Rica, and was a Sephardic Jew from a Jamaican family.[2] She belonged to a powerful family who made their fortune in sugar and Appleton rum toward the end of slavery. They are named as one of the 21 families who controlled Jamaica in the 20th century.[3] Blackwell's parents divorced when he was twelve. Blanche was considered the love of Ian Fleming's later life, becoming the James Bond author's muse and the inspiration for the character Pussy Galore in Goldfinger.[5] She owned several thousand acres of land near Oracabessa, Jamaica, and sold properties to both Fleming and Noël Coward.[6] Due to her heritage, Blanche was viewed as a white Jamaican.[5]

Blackwell spent his childhood in Jamaica, and was sent to Britain to continue his education at Harrow.[7] Deciding not to attend university, he returned to Jamaica to become ADC to the Governor of Jamaica Sir Hugh Foot. After Foot was transferred to Cyprus, Blackwell left King's House to pursue a career in real estate and other businesses, including managing jukeboxes up and down the country, which brought him into contact with the Jamaican music community.[1]

In 1958, Blackwell was sailing off Helshire Beach when his boat ran aground on a coral reef. The twenty one-year-old swam to the coast and attempted to find help along the shore in searing temperatures. Collapsing on the beach, Blackwell was rescued by Rasta fishermen who tended his wounds and restored him back to health with traditional Ital food. The experience gave Blackwell a spiritual introduction to Rastafarianism, and was a key to his connection to the culture and its music.[3]

Aged 22, Blackwell formed Island Records in 1958 with a start-up investment of $10,000 provided by his parents. The business took its name from Alec Waugh's novel Island in the Sun.[2] Radio personality Graeme Goodall was his initial business partner.[3] Blackwell received an allowance of £2,000 per year from his mother, which enabled him to have his own apartment at a young age and build on the low revenue that the business was bringing in.[1][8] Island's debut release was a piano and vocal album by Bermudian jazz pianist Lance Hayward.[9] Blackwell began recording Jamaican popular music in 1959, achieving a number one hit there with Laurel Aitken's "Boogie in my Bones/Little Sheila".[2]

In 1961, Blackwell acted as a location scout and production assistant for the 1962 Bond film Dr No. After the movie wrapped, producer Harry Saltzman offered him a full-time position. Conflicted between music and film, Blackwell visited a psychic, who told him that he would be successful if he stayed in the music industry.[3]

By 1962, the fledgling record producer had released 26 singles and two albums on Island.[2] Blackwell returned to England that year and continued to grow his business. He began having success with the niche market of Jamaican music, and progressed to bringing in licensed master tapes. One of these contained a performance by fifteen-year-old Millie Small, who Blackwell brought over to England. In 1964, he produced Small's cover of a 1956 Barbie Gaye song "My Boy Lollypop" which was one of the first songs recorded in the "ska" style. Millie Small's version was a smash hit, selling over six million records worldwide. It launched Island Records into mainstream popular music, and is acknowledged as the first international ska hit.

After discovering The Spencer Davis Group, featuring Steve Winwood, Blackwell focused on the rock acts that Island had signed. Island became one of the most successful independent labels of the 1960s, 1970s, and 1980s with artists like Traffic, King Crimson, Emerson, Lake & Palmer, Jethro Tull, Cat Stevens, Grace Jones, Free, Fairport Convention, John Martyn, Sly and Robbie, Sparks, Spooky Tooth, Nick Drake, Roxy Music, Robert Palmer, Melissa Etheridge, The Cranberries and U2. Blackwell also signed artists in non-English speaking countries, one of them was French singer Charlélie Couture[10] who notably released the album Poèmes rock on Island, which is seen in France as one of the major French rock albums.[11] "The bigger labels are supermarkets", Blackwell remarked. "I like to think of Island as a very classy delicatessen."[2] However, Blackwell has admitted to turning down some major names. One was Elton John: He considered the pianist too shy to become a performer. Ironically, years later, after Blackwell had sold Island to PolyGram, its successor Universal Music Group re-released some of John's older albums on the Island label.

Island and Blackwell himself became renowned for a relaxed, nurturing approach. Blackwell showed skill in spotting and creating trends, as well as a gift for finding talent. He had an imaginative flair for marketing, and Island's releases were often packaged in lovingly designed gatefold sleeves.[1] Blackwell has said: "I really believe that if people see something that looks good, subconsciously they'll think maybe there's something going on inside, on the record. There were times when somebody came out with a cover which was actually better than the record itself, so I'd have to send them back to remake the record."[1]

Eventually, Island moved into movies and released The Harder They Come in the UK, which featured Jimmy Cliff. Produced and directed by fellow Jamaican Perry Henzell, the film marked the first time that Jamaican themes appeared in mainstream cinema.[2]

In 1977, Blackwell built Compass Point Studios in Nassau, Bahamas as a recording home for his and other artists.

One of Blackwell's notable achievements was bringing Bob Marley & The Wailers to the attention of international audiences.[2] Without a signed contract, Blackwell advanced money to The Wailers for their first Island album, displaying the trust which stemmed from his 1958 beach rescue by Rastas. Blackwell's gesture led to the longterm success of both Marley and the label.

Of his experience with Marley, Blackwell has said:

Blackwell sold his stake in Island in 1989, eventually resigning from the company in 1997. In 2009, Blackwell was at the centre of celebrations held in London for Island's fiftieth anniversary.[1]

Each of Blackwell's companies was eventually sold to PolyGram and, in 1998, were part of the Universal Music Group conglomerate, but Blackwell left with a unique reputation for looking after artists as diverse as Bob Marley, U2, Cat Stevens, Grace Jones, Steve Winwood, Melissa Etheridge, Tom Waits, The Cranberries, Richard Thompson and PJ Harvey.

After selling these companies, Blackwell went on to found Palm Pictures, a media entertainment company with music, film and DVD releases. In the late 1990s, Blackwell merged Palm Pictures with Rykodisc to form RykoPalm, a new operation.[2]

Blackwell has long owned Goldeneye in Oracabessa, the previous home of Ian Fleming, where the author wrote all the James Bond books. Until his death, Fleming was the longtime lover of Blackwell's mother, Blanche.[5] Blackwell developed the property into a community of villas and beach cottages, each with its own private access to the sea, and Goldeneye is considered the most exclusive of the Island Outpost resorts.[3]

Blackwell currently runs Island Outpost, which he set up to operate and market a group of elite resorts in Jamaica, including Strawberry Hill in the Blue Mountains (where Marley recovered after being shot in 1976), The Caves in Negril, and GoldenEye Hotel & Resort in Oracabessa. Island Outpost also owned The Tides and The Marlin in Miami Beach, Florida.[3] The Miami Beach properties including The Tides, The Marlin and The Kent along with several other hotels in Miami Beach and The Bahamas have since been sold.

Blackwell is involved in a number of philanthropic organizations. Among these are Island ACTS, the Oracabessa Foundation, the Mary Vinson Blackwell Foundation (established in honor of his late wife to whom he was married from 1998 till 2009), and the Jamaican Conservation Trust.

In 2003, Blackwell launched the Goldeneye Film Festival, which ran for 3 years. In September that year, Blackwell received the coveted Jamaican Musgrave Medal, awarded to Jamaicans who excel in the arts, music and public service. In 2004, the Order of Jamaica was bestowed upon Blackwell for philanthropy and outstanding contribution to the entertainment industry.[3]

Blackwell revisited his family's legacy in Jamaica's banana, coconut, and rum export industries in 2009, when, at the age of 72 years, he introduced his own brand of rum, "Blackwell Black Gold", onto the alcohol market.[12] The beverage is made from Jamaican sugar cane, water, and yeast, and aged in American oak barrels.[13]

In April 2009, the UK magazine Music Week named Blackwell the most influential figure in the last 50 years of the British music industry.[14][15][16]

This article uses material from the article Chris Blackwell from the free encyclopedia Wikipedia and it is licensed under the GNU Free Documentation License.