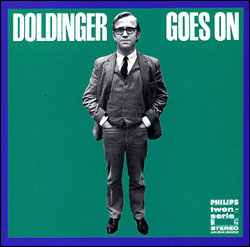 Klaus Doldinger (born 12 May 1936) is a German saxophonist known for his work in jazz and as a film music composer. He was the recipient of 1997's Bavarian Film Awards.

Doldinger was born in Berlin, and entered a Düsseldorf conservatory in 1947, originally studying piano and then clarinet,[1] graduating in 1957. In his student years, Doldinger gained professional performing experience, starting in 1953 in the German Dixieland band The Feetwarmers, and recording with them in 1955. Later that year he founded Oscar's Trio, modeled on Oscar Peterson's work. During the 1960s he worked as a tenor saxophonist, working with visiting American jazz musicians and recording in his own right.[1]

Doldinger married Inge Beck in 1960; they have three children, Viola, Melanie and Nicolas Doldinger. Since 1968 they have resided in Icking, a small Bavarian village, south of Munich.

This article uses material from the article Klaus Doldinger from the free encyclopedia Wikipedia and it is licensed under the GNU Free Documentation License.