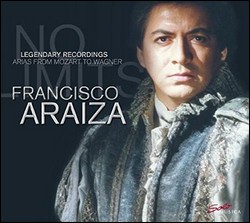 Francisco Araiza (born October 4, 1950), is a Mexican operatic tenor. He was named Kammersänger of the Wiener Staatsoper in 1988 and has been a permanent member of the Opernhaus Zürich since 1977. He made an international operatic career starting with the great Mozart and Rossini tenor roles. Already known as one the best interpreters in the lyric repertory, he developed later on into the heavier lirico spinto, the French and heavier German repertory with roles like Edgardo, Alfredo, Duke of Mantua, Riccardo III, Don Alvaro, Don Carlo, Cavaradossi, Pinkerton, Rodolfo, Calaf, Andrea Chénier, Des Grieux, Faust, Hoffmann, Werther, Romeo, Don José, Lenski and the young Wagnerian heroes Lohengrin, Stolzing, Loge, Parsifal and Siegmund.

Born and educated in Mexico City, Francisco Araiza studied voice with Irma Gonzalez in the Conservatorio Nacional de Musica and German repertory with Erika Kubacsek. At the same time he earned his degree in Business Administration at the University of Mexico City UNAM. In 1970, he made his professional debut in Mexico City as Jaquino in Beethoven's Fidelio. In 1974, he went to Europe and took masterclasses with Richard Holm and Erik Werba at the Munich Hochschule für Musik after winning the Bavarian Broadcasting Voice Competition. After three years at the Badisches Staatstheater Karlsruhe from 1974 to 1977 he became a permanent member of the Zurich Opera House. Herbert von Karajan chose him for his recording of Die Zauberflöte (the first digital opera recording) and invited him to the Salzburg Festival to sing the Mozart Requiem in 1980 enhancing the international career of the upcoming star.

Among his roles, he has sung Belmonte at the Bayerische Staatsoper Munich under the baton of legendary conductor Karl Böhm in his last operatic appearance. He has starred together with Frederica von Stade in the Unitel film version of Rossini's La Cenerentola. One of his greatest successes was singing the reole of Des Grieux in Jean-Pierre Ponnelle's production of Manon (available on DVD) at the Vienna State Opera in 1983 which marked the first step into the heavier repertory. In 1985 he sang the title role in Faust directed by Ken Russell also in Vienna (available on DVD) followed by the Philips recording under Sir Colin Davis. He made his Metropolitan Opera debut in New York as Belmonte, later on singing Tamino in the new production of The Magic Flute during the Mozart Anniversary Year 1991 (a performance telecast on PBS and available on DVD) and he had an especially great success with his role debut as Walter von Stolzing in the new production of Die Meistersinger von Nürnberg in 1993, both conducted by James Levine, which highlighted his vocal and artistic development.

Besides his operatic engagements, Francisco Araiza is also a highly esteemed concert and Lieder-singer: in 1984 he received the famous Deutscher Schallplattenpreis for his recording of Schubert Lieder, as well as the Mainichi Award for «Best musical event of the year» for his Tokyo recital in 1988. He was awarded twice with the Orphée d'Or by the Académie Nationale du Disque Lyrique Paris in 1984, for his interpretation as Count Almaviva in the opera recording of The Barber of Seville and for the live recording of the Salzburg Festival production of Così fan tutte. Further awards include the Mozart Medal of the University of Mexico City UNAM in 1991, the Mario-del-Monaco-Medal Otello d'Oro in 1995, the Golden Mercure as Best Performing Opera Singer (Munich 1996) and lately the FAOT- Medal by the Cultural Institute of Sonora, Mexico in 2008 honouring his artistic achievement. In July 2011 on the occasion of his 40 years of International Career as a singer he was honoured by the Instituto Nacional de Bellas Artes y Literatura y la Compania Nacional de Opera, CONACULTA in Mexico City with the "Gold Medal of Fine Arts".

Francisco Araiza has been invited to appear at official state visits, mainly in Germany. He has been invited to sing for statesmen like Michail Gorbatschow, Helmut Kohl, former Mexican Presidents Carlos Salinas de Gortari and Ernesto Zedillo, His Majesty King Juan Carlos of Spain, Richard von Weizäcker, Roman Herzog, Gerhard Schröder and His Highness The Aga Khan. He also sang on many special occasions like anniversaries of famous companies like Rosenthal, Wempe, Swarovski, Sixt, Deutsche Post AG, Bulgari or Rolex as well as charity events all over the world.

Since 1988 Francisco Araiza sponsors the Francisco Araiza Voice Competition Award of the Escuela Nacional de Musica de la UNAM Mexico City. In 1996 he gave his first Masterclass at the Hochschule für Musik in Vienna, later on at the Richard-Strauss-Tage in Garmisch, at the Munich Singschul' and the UNAM Mexico City. In 2003 he was nominated Professor by the Ministry of Baden-Württemberg, Germany, to teach at the Hochschule für Musik und Darstellende Kunst Stuttgart and three years later he joined the Board of Directors of the International Opernstudio Zurich IOS teaching now Vocal Technique and Style. Frequently he is asked to participate in the juries of all international Singing Contests, for instance the ARD Voice Competition in Munich and the most renowned Bertelsmann Voice Competition Neue Stimmen in Gütersloh, Germany. Furthermore he is member of the Managing Board of the Liz Mohn Kultur- und Musikstiftung (Bertelsmann) and the Europäische Kulturstiftung Europamusicale. From November 2007 till June 2009 he was the Artistic Director of the International Hugo Wolf Akademie.

This article uses material from the article Francisco Araiza from the free encyclopedia Wikipedia and it is licensed under the GNU Free Documentation License.