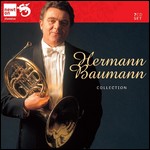 After starting his musical career as a singer and jazz drummer he switched to horn at the age of 17.[1] He studied with Fritz Huth at the Hochschule für Musik Würzburg and then played principal horn in various orchestras for 12 years, including the Dortmunder Philharmoniker and the Stuttgart Radio Symphony Orchestra.

His career as a soloist started in 1964 when he won first prize in the prestigious ARD International Music Competition in Munich. Since then he has played on many solo and chamber albums, including "Virtuoso Horn", released in 1994.[2][3] He has done pioneering work in Baroque music and also in the renaissance of performance on the natural horn of the classical period.[4] In 1999, the Historic Brass Society honored him with the Christopher Monk Award for his lifelong contribution to music on old instruments.

Baumann taught at the Folkwang Hochschule in Essen for 30 years and at horn conventions around the world.

This article uses material from the article Hermann Baumann (musician) from the free encyclopedia Wikipedia and it is licensed under the GNU Free Documentation License.

Ludwig van Beethoven Ouvertüre "Coriolan"
Update Required To play the media you will need to either update your browser to a recent version or update your Flash plugin.