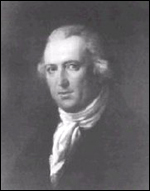 Johann Baptist Vanhal (Jan Ktitel Vahal)[1] also spelled Wahal (the spelling the composer himself and at least one of his publishers used), Wanhal or Wanhall (May 12, 1739August 20, 1813) was an important classical music composer. He was born in Nechanice, Bohemia, and died in Vienna.

Born in Nechanice, Bohemia, to a Czech peasant family, Vanhal received his early training from a local musician. From these humble beginnings he was able to earn a living as a village organist and choirmaster. The Countess Schaffgotsch, who heard him playing the violin, took him to Vienna in 1760, where she arranged lessons in composition with Carl Ditters von Dittersdorf. Further patronage helped him to travel and gain further knowledge of music and by the age of 35, he was moving in exalted musical company: it is reported he played quartets with Haydn, Mozart, and Dittersdorf.[2] Vanhal tailored his output to economic realities of the day and ceased writing symphonies in the late-1770s. He wrote three operas: Il Demofoonte (1770), Il trionfo di Clelia (1770), and The Princess of Tarento.[3] In the 1770s, Vanhal met the contrabassist Johannes Matthias Sperger and wrote a double bass concerto for him. The English music historian Charles Burney visited Vanhal in 1772. Mozart performed Vanhal's Violin Concerto in B flat in Augsburg in 1777. In or around 1784, Haydn, Dittersdorf, Mozart and Vanhal played string quartets together; Haydn and Dittersdorf played the violins, Mozart the viola, and Vanhal cello. The recorder of this event, the composer and tenor Michael Kelly, stated that they played well but not outstandingly together, but the image of four of the great composers of the time all joined in common music-making is still a classic image of the Classical era.

Vanhal was reported to have suffered from an unspecified nervous disorder, which eventually went away,[4] but which gave rise to the opinion held by Burney and others that the quality of Vanhal's compositions deteriorated with the disappearance of his condition.[5] Scholars such as Paul Bryan find that "the quality and quantity of the serious works he [Vanhal] composed after 1770, ... belie that assertion."[6]

He had to be a prolific writer to meet the demands made upon him, and attributed to him are 100 quartets, at least 73 symphonies, 95 sacred works, and a large number of instrumental and vocal works. The symphonies, in particular, have been committed increasingly often to compact disc in recent times, and the best of them are comparable with many of Haydn's. Many of Vanhal's symphonies are in minor keys and are considered highly influential to the "Sturm und Drang" movement of his time. "Vanhal makes use of repeated semiquavers, pounding quavers in the bass line, wide skips in the themes, sudden pauses (fermatas), silences, exaggerated dynamic marks ... and all these features ... appear in Mozart's first large-scale Sturm und Drang symphony, no. 25 in g minor (K. 183) of 1773."[7] This kind of style also appears in Joseph Haydn's Symphony No. 83 in g minor, The Hen (1785), and Muzio Clementi's Sonata in g minor, Op.34, No.2 (circa 1795).

Such was his success that within a few years of his symphonies being written, they were being performed around the world, and as far distant as the United States.[8] In later life, however, he rarely moved from Vienna where he was also an active teacher.

Vanhal left 51 published symphonies. There are also another 81 symphonies which are preserved only in manuscripts. [according to the catalogue published by Civra Ferruccio, Torino 1985]. Even though the modern actual French spelling of Symphonie Périodique is Symphonie Périodique, the original 18th century French title of such works was Simphonie Periodique, as it can be seen on the 18th century frontispiece of Vanhal's published symphonies "a Amsterdam chez J.J. Hummel, Marchand & Imprimeur de Musique".

This article uses material from the article Johann Baptist Vanhal from the free encyclopedia Wikipedia and it is licensed under the GNU Free Documentation License.