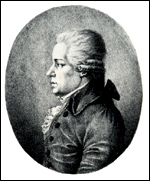 Dittersdorf was born in the Laimgrube (now Mariahilf) district of Vienna, Austria, as August Carl Ditters. His father was a military tailor in the Austrian Imperial Army of Charles VI, for a number of German-speaking regiments. After retiring honorably from his military obligation, he was provided with royal letters of reference and a sinecure with the Imperial Theatre. In 1745, the six-year-old August Carl was introduced to the violin and his father's moderate financial position allowed him not only a good general education at a Jesuit school, but private tutelage in music, violin, French and religion. After leaving his first teacher, Carl studied violin with J. Ziegler, who by 1750, through his influence, secured his pupil's appointment as a violinist in the orchestra of the Benedictine church on the Freyung.

Prince Joseph of Saxe-Hildburghausen soon noticed young Ditters, and on 1 March 1751 hired him for his court orchestra. Under princely auspices he studied violin with Francesco Trani who, impressed with the ability of his pupil in composition, commended him to Giuseppe Bonno who instructed him in Fuxian counterpoint and free composition. After a few years Prince Joseph disbanded the orchestra, since he had to leave Vienna to assume the regency in Hildburghausen, and the Austrian Empress hired Dittersdorf for her own orchestra through Count Durazzo, Theatre Director at the Imperial Court. In 1761 he was engaged as violinist in the Imperial Theatre orchestra, and in 1762 its conductor. It was during this period that he became acquainted with Christoph Willibald Gluck, who had just achieved greatness as an opera composer with the Vienna première of his Orfeo ed Euridice. In 1763 he traveled to Bologna with Gluck to see the opera Il trionfo di Clelia: an Italian tour that was to leave the greatest impression on his future work as a composer from both the Austrian Gluck and the contemporary Italian musical scene. In 1764 he traveled to Paris, a trip with only scarce and uncertain documentation. Back in Vienna in 1764, his contract with Count Durazzo expired that winter, but he met the great Joseph Haydn and became one of his closest friends.

In 1764, Ditters assumed the post of Kapellmeister at the court of Ádám Patachich, Hungarian nobleman and Bishop of Nagyvárad (Oradea, Romania). The following year he was introduced to Philipp Gotthard von Schaffgotsch, the Prince-Bishop of Breslau, who was in the process of creating a cultural center around his court based at Château Jánský vrch (Johannesberg) in Javorník (today part of the Czech Republic). He accepted the post of Hofkomponist (court composer) in 1771, and it was during his tenure at Johannesberg that most of his creative output was produced. Over the next twenty years he wrote symphonies, string quartets and other chamber music, and opere buffe. In 1773 the prince-bishop appointed him Amtshauptmann of nearby Jeseník (Freiwaldau), one of several measures to help entice the cosmopolitan composer to remain at isolated Johannesberg. Since this new post required a noble title, Ditters was sent to Vienna and given the noble title of von Dittersdorf. His full surname thus became "Ditters von Dittersdorf", but he is usually referred to simply as "Dittersdorf".

Johann Baptist Wanhal was perhaps Dittersdorf's most eminent pupil. About 1785, Haydn, Dittersdorf, Mozart and Wanhal played string quartets together, Dittersdorf taking first violin, Haydn second violin, Mozart viola and Wanhal cello. Eminent Irish tenor Michael Kelly, for whom Mozart created the lyric tenor roles of Don Ottavio and Ferrando in his great da Ponte operas Don Giovanni and Cosi fan tutte, was of the opinion that although they played well their performance as a whole was not outstanding; but the image of four of the greatest composers of their time joining in common music-making remains an unforgettable vignette of the Classical era (comprising the second half of the eighteenth century).

In 1794, after twenty-four years at Johannesberg, Dittersdorf, after a serious clash with von Schaffgotsch, was expelled from his palace. Sometime the following year, he was invited by Baron Ignaz von Stillfried to live in his spare castle known as ervená Lhota in southern Bohemia. His final decade was occupied with overseeing operatic productions in addition to compiling and editing his own music for publication.

He died at Nový Dvr (Neuhof, or "New Court") where Château ervená Lhota stood, and was buried in the town of Detná. He finished his autobiography just three days before his death.

Ditters' early work laid the groundwork for his later more important compositions. His symphonic and chamber compositions greatly emphasize sensuous Italo-Austrian melody over motivic development (which is often entirely lacking even in his best works, quite unlike those of his greater peers Haydn and Mozart)

Even with these reservations, Dittersdorf was an important composer of the Classical era. After some early Italian opere buffe, he turned to writing German Singspiele instead, with Der Apotheker und der Doktor (1786, generally known today as Doktor und Apotheker) in particular being a tremendous success in his lifetime, playing in houses all over Europe and recorded almost two centuries later. Among his 120-or-so symphonies are twelve programmatic ones based on Ovid's Metamorphoses, although only six have survived (and have also been recorded). He also wrote oratorios, cantatas and concertos (among which are two for double bass and one for viola), string quartets and other chamber music, piano pieces and other miscellaneous works. His memoirs, Lebenbeschreibung ("Description of [My] Life"), were published in Leipzig in 1801. Some of his compositions, including the double bass concerto, were published in Leipzig by the Friedrich Hofmeister Musikverlag.[2]

Dittersdorf left about 120 symphonies with solid attribution. There are about another 90 symphonies which may be Dittersdorf's workaccording to the catalogue published by Geyer Helen, Torino 1985. Most of the symphonies are preserved only in manuscripts. Many manuscripts are inscribed di Carlo de Dittersdorf or similar, however they are copies of now lost original scores.

This article uses material from the article Carl Ditters von Dittersdorf from the free encyclopedia Wikipedia and it is licensed under the GNU Free Documentation License.