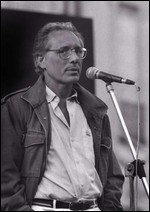 Vincenzo Jannacci (b. June 3, 1935 in Milan), more commonly known as Enzo Jannacci (Italian pronunciation: [vintentso] or [entso jannatti]), is an Italian singer-songwriter, actor and stand-up comedian. He is regarded as one of the most important artists in the post-war Italian music scene.[1]

Jannacci is widely considered as a master of musical art and cabaret, and in the course of his career has collaborated with many famous Italian musicians, performing artists, journalists, television personalities and comedians. He has written around thirty albums and soundtracks, some of which have since come to be seen as milestones in the history of Italian popular music.[2] In the second half of the 1990s he was considered to be finished as an artist, but in recent years he has managed to appeal to a new audience and has won awards and recognition for his latest recorded works.

He is also regarded as one of the founders of Italian rock and roll music, along with Adriano Celentano, Luigi Tenco and Giorgio Gaber, with whom he collaborated for over forty years.[3]

Enzo Jannacci was born in Milan on June 3, 1935. On his father's side his family is from Puglia: his grandfather, also called Vincenzo, moved to Milan from Bari just before the onset of the First World War. His mother's side of the family is from Lombardy.

His father was an aeronautical official and worked at Forlanini airport (now more commonly known as Linate). He took part in the Italian resistance movement, in particular during the defense of Milanese aviation at Piazza Novelli, an act which later inspired songs such as Sei minuti all'alba ("Six Minutes to Dawn").

In 1954, having abandoned his studies at the Alessandro Moreschi Institute, where he met Giorgio Gaber, he graduated with a degree in medicine from the University of Milan. He left Italy for South Africa to specialise in cardiac surgery, where he joined the team of Christiaan Barnard, the famous surgeon. He later moved to the United States. On November 23, 1967 he married Giuliana Orefice, who gave birth to Paolo, their only child, five years later. Today Paolo is a musician and conductor.

On January 1, 2003, the very first day of Jannacci's retirement, his friend Giorgo Gaber died after a long illness at his home near Camaiore. He went to the funeral, which was held two days later at Abbazia di Chiaravalle where Gaber had married Ombretta Colli, but was only able to say that he had lost a brother.

This article uses material from the article Enzo Jannacci from the free encyclopedia Wikipedia and it is licensed under the GNU Free Documentation License.

Franz Krommer Adagio aus der Sinfonie Nr.7 in g-Moll
Update Required To play the media you will need to either update your browser to a recent version or update your Flash plugin.