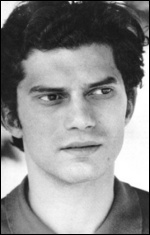 Luigi Tenco (21 March 1938 – 27 January 1967) was an Italian singer, songwriter. After his alleged suicide, he became an icon of love and despair. The true causes of his death have not yet been agreed upon.

Tenco was born in Cassine (province of Alessandria) in 1938, the son of Teresa Zoccola and Giuseppe Tenco. He never knew his father, who died in unclear circumstances. It has been rumored, that Luigi Tenco was the fruit of an extramarital relationship of his mother.

Tenco spent his childhood in Cassine and Ricaldone until 1948, when he moved to Liguria, first to Nervi and then to Genoa, where his mother had a wine shop. During high school, Tenco founded the Jelly Roll Morton Boys Jazz band, in which Tenco played the clarinet and another singer, later to become famous, Bruno Lauzi, the banjo. Gino Paoli, also a future famous Italian singer-songwriter, was a member of the later Tenco band, I Diavoli del Rock (The Rock Devils).

Tenco made his debut in the world of Italian professional music with the band I Cavalieri (The Knights), which included Giampiero Reverberi and Enzo Jannacci amongst others. During this period he used the pseudonym Gigi Mai. In 1961 Tenco released his first single under his real name, entitled "Quando" ("When").

In 1962 Tenco began a short-lived cinematic experience, with Luciano Salce's movie La Cuccagna. He also collaborated on the soundtrack to the film. During this period he also formed a strong friendship with the Genoese anarchist poet Riccardo Mannerini. In 1963, however, his friendship with Gino Paoli broke up, due to a troubled relationship with the actress Stefania Sandrelli.

Tenco's first LP was released in 1962, Ballate E Canzoni. One of the songs, "Cara Maestra" ("Dear Teacher"), was censored by the then thriving Italian media censorship. The censors struck again in the following year, against his songs "Io Sì" ("I Do") and "Una Brava Ragazza" ("A Nice Girl"). In September 1964, he released "Ho capito che ti amo" a song written by him with musical arrangement Ezio Leoni. It was released on the Italian record label Jolly as Side A of a 45 rpm side B being "Io lo so già".[1]

In 1966, suffering through a period of compulsory military service, he released Un Giorno Dopo L'Altro (One Day after Another) for RCA. In Rome during the same year, he met and befriended the Egypt-Italo-French singer Dalida. The two were eventually to become lovers.

In 1967 he took part in the Italian Song Festival in Sanremo. It was rumored, that he participated against his will. The song he presented was "Ciao Amore Ciao" ("Bye Love, Bye"), which he sang together with Dalida. Tenco allegedly committed suicide on January 27, 1967, he was only 28 years old, after learning, that his song had been eliminated from the final competition.[2] Tenco was found by Dalida in his hotel room with a bullet wound in his left temple and a note announcing, that his gesture was against the jury and public's choices during the competition. Only days earlier, Tenco's wedding to Dalida had been announced.

Tenco was buried in Ricaldone. In 1974 the Tenco Award was instituted, and has been held every year since in Sanremo. Many of the most renowned Italian singer-songwriters from the 1970s declared explicitly the influence of Tenco on their work. Francesco De Gregori's album Bufalo Bill of 1976 contained a song, "Festival", about Tenco's suicide; it points out the hypocrisy with which the music establishment tried to minimize the dramatic event, in order to let the show go on.

The French television channel TV5 recently carried a full-length dramatization of the love affair of Tenco and Dalida. Tenco was played by Alessandro Gassman, while Dalida was played by Sabrina Ferilli.

The Italian judicial system later began re-examining Luigi Tenco's suicide. It was pointed out, that the bullet hole was on the left temple, while the singer was right-handed. It had also been revealed that no autopsy had been done on the singer's corpse, and no calligraphic analysis on the suicide note with which he explained his final gesture.

On 15 February 2006, Italian police exhumed Tenco's body for further investigation.[3] The next day, results from the new autopsy and ballistics analysis were reported. According to Italian experts, what had been thought to be the entry hole on the left temple was actually the exit site. The bullet trajectory was said to be compatible with suicide.[4]

In 1999, the play Solitudini – Luigi Tenco e Dalida, written and directed by Maurizio Valtieri, was performed in Rome.

This article uses material from the article Luigi Tenco from the free encyclopedia Wikipedia and it is licensed under the GNU Free Documentation License.