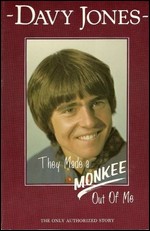 David Thomas "Davy" Jones (born 30 December 1945) is an English pop singer-songwriter and actor best known as a member of The Monkees.

Jones was born in Manchester, England on 30 December 1945. He lost his mother to emphysema when he was 14 years old. His father had hopes for him as a jockey, and just after his mother died, his father sent him to live with Basil Foster to train. Basil was approached by a friend who worked in the theatre on the West End of London during casting. Basil said, "I've got the kid." Jones then became more interested in being in show business. As a teenager he appeared on British TV soap operas, including Coronation Street as Ena Sharples's grandson, Colin Lomax. He appeared to great acclaim in the musical Oliver! as the Artful Dodger, playing the role in London and on Broadway, and was nominated for a Tony Award.[1] On 9 February 1964, he appeared with the Broadway cast of Oliver on the Ed Sullivan show, the same episode on which The Beatles made their first appearance. Jones says of that night, "I watched the Beatles from the side of the stage, I saw the girls going crazy, and I said to myself, this is it, I want a piece of that."

Ward Sylvester of Screen Gems (then the television division of Columbia Pictures) signed Jones to a contract, following his Ed Sullivan appearance. A pair of American television appearances followed, in episodes of Ben Casey and The Farmer's Daughter. He also recorded a single and album for Colpix Records, which charted but weren't huge hits.

From 1965 to 1971, Jones, 21 years old, was a member of The Monkees, a pop-rock group formed expressly for a TV show of the same name. With Screen Gems producing the series, Jones was shortlisted for auditions, as he was the only Monkee who was signed to a deal with the studio, but still had to meet producers Bob Rafelson and Bert Schneider's standards.

As a Monkee, Jones sang lead vocals on many of the group's songs, including "I Wanna Be Free" and "Daydream Believer". After the show went off the air and the group disbanded, he continued to perform solo, later joining with fellow-Monkee Micky Dolenz and songwriters Tommy Boyce and Bobby Hart as a short-lived group called Dolenz, Jones, Boyce & Hart.

He guest-starred as himself on the TV Show Sabrina The Teenage Witch and sang Daydream Believer to Sabrina.

In 1978 he appeared with Micky Dolenz in Harry Nilsson's play The Point at the Mermaid Theatre in London. Jones as Oblio and Dolenz as The Count.

In recent years, Jones performed with his former bandmates in reunion tours and appeared in several productions of Oliver! as Fagin. He continued to race horses with some success in his native England, while residing in Beavertown, Pennsylvania, United States. He owns and races horses in the United States and served as a commercial spokesman for Colonial Downs racetrack in Virginia.[2] He has a residence in Stuart, Florida.

In April 2006, Jones recorded the single "Your Personal Penguin,[3]" written by children's author Sandra Boynton, as a companion piece to her new board book of the same title.[4] On 1 November 2007, the Boynton book and CD titled "Blue Moo" was released. Davy is featured in the book and on the CD, singing "Your Personal Penguin" and has become a close friend of Boynton as a result of the project. In 2007 Jones also recorded the theme for a campy movie comedy called Sexina: Popstar PI.[5]

In October 2009, Jones put to rest any rumours concerning a Monkees' reunion, stating he has no desire to work with the band. "It's not a case of dollars and cents. It's a case of satisfying yourself," said Jones. "I don't have anything to prove. The Monkees proved it for me."[9]

NOTES: Jones recorded two singles with former Monkee Micky Dolenz and songwriters Tommy Boyce and Bobby Hart under the group name "Dolenz, Jones, Boyce & Hart" on Capitol Records in 1975. They were "I Remember The Feeling"/"You & I" (Capitol 4180) and "I Love You (And I'm Glad That I Said It)"/"Savin' My Love For You" (Capitol 4271). Jones also released a single with Micky Dolenz and Peter Tork in 1976 titled "Christmas Is My Time of Year" / "White Christmas" (Christmas CDS-700/701) which saw a rerelease in 1986 (Christmas CDS-702/703). Lastly, Jones had an EP release in the UK with Micky Dolenz culling tracks from their performance in Harry Nilsson's "The Point!" performance in London in 1978: "Lifeline" (Jones) / "It's A Jungle Out There" (Dolenz) / "Gotta Get Up" (Jones & Dolenz). It was released as MCA 348.

NOTES: Jones recorded an album with former Monkee Micky Dolenz and songwriters Tommy Boyce and Bobby Hart under the group name "Dolenz, Jones, Boyce & Hart" on Capitol Records in 1975. The self-titled album was released as Capitol ST-11513. He has released a number of albums in cassette- and/or CD-only formats, including "Davy Jones Sings The Monkees and More," "It's Christmas Time Again," "JustMe," "JustMe 2" and the archival 4-album "Just For The Record" set.

In addition, Davy Jones released an album in 2001 called Just Me, comprising songs written by him, some written for the album and others originally on Monkees releases.[11]

This article uses material from the article Davy Jones (actor) from the free encyclopedia Wikipedia and it is licensed under the GNU Free Documentation License.