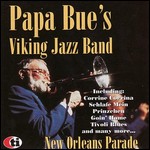 Arne "Papa" Bue Jensen (8 May 1930 2 November 2011),[1] known as Papa Bue, was a Danish trombonist and bandleader, chiefly associated with the Dixieland jazz revival style of which he was considered an important proponent. He founded and led the Viking Jazz Band, which was active from 1956.[1][2][3]

Arne Bue Jensen was born in Copenhagen, Denmark.[1] At an early age, he became fascinated with jazz, prompted by a pile of records from his brother with artists such as Harry James, Artie Shaw, Tommy Dorsey, Glenn Miller and Bert Ambrose. Some records by Bunk Johnson and George Lewis reviving the New Orleans musical made a particular impression.

After World War II, Jensen became a sailor for a few years, visiting ports all around the world, where he had an opportunity to listen to enjoy their often lively music venues. It was around this time that he started to play jazz. For borrowed money, which it would take him years to repay, he bought a slide trombone. He was taught the seven basic positions of the slide by a musician from the Royal Danish Orchestra but apart from that he was self-taught. Soon he played with other young jazz musicians and performed in clubs and bars around Copenhagen. He played in bands such as the Royal Jazzman (later the Bohana Jazz Band), Henrik Johansens Jazz Band and the Saint Peter Street Stompers, participating as a sideman in several of their recordings.[4] In the 1950s, Papa Bue worked with the Bonanza Jazz Band, Chris Barber, Adrian Bentzon and Henrik Johansen.[1]

In the mid 1950s, he was part of the musical environment of the entertainment district around Nyhavn. He jammed with other young jazz musicians in various informal arrangements and, along with six other musicians, he founded the New Orleans Jazz Band in 1956, after a jam session in the establishment 'Cap Horn'. Since Jensen was the eldest he became the bandleader and, as he was also the only band member who was a father, he was given the nickname "Papa Bue" which stuck.[4]

In late 1957, Jensen renamed the ensemble the Viking Jazz Band. The name came from the American journalist and vocalist Shel Silverstein[5] who attended one of their concerts at Cap Horn during a stay in Copenhagen. He subsequently wrote an article about them, calling them the Danish Vikings, explaining that they played the original New Orleans and Chicago jazz even better than any American band at the time. The band adopted the new name and released their first album as the Viking Jazz Band in 1958.[4] In 1960 their "Schlafe Mein Prinzchen" sold over one million copies, and was awarded a gold disc.[6]

At a time when many jazz musicians worked in the Bebop idiom, his style remained based on the Dixieland tradition but also with influences from early swing music. He is considered one of the most significant proponents of his genre.[7]

Jensen released a large number of albums, many of them issued or reissued on Storyville Records, Timeless Records, and Music Mecca.

It was Papa Bue's Viking Jazz Band which recorded Bent Fabricius-Bjerre's theme music for the Olsen Gang series, now a legendary sequence for the Danes.[7]

In 1969, Papa Bue's Viking Jazz Band was the only non-American band to participate in the New Orleans Jazz Festival and Jensen was honored with the "Golden Keys to the City".[7]

This article uses material from the article Papa Bue from the free encyclopedia Wikipedia and it is licensed under the GNU Free Documentation License.