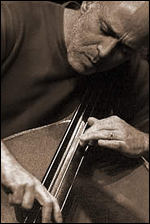 Larry Gray is a Chicago musician known for his compositions and skill on the Double Bass and Cello. His primary teachers were Joseph Guastafeste, longtime principal bassist of the Chicago Symphony Orchestra, and cellist Karl Fruh, a highly regarded soloist and teacher.[1]

Gray has been married to Karolyn R. Kuehner since 1990. Their daughter, Soffia H. Kuehner Gray, was born in 1994.

Gray is an arranger and composer whose discography includes Solo + Quartet on Premonition Records; Gravity, a solo bass recording and One Look, featuring his piano trio's performances of original compositions, both on Graywater Records; the Ramsey Lewis trio recordings Appassionata, Time Flies and With One Voice; the Ramsey Lewis and Nancy Wilson collaborations Meant to Be and Simple Pleasures; all on Narada/Virgin Records. Gray also arranged and produced the critically acclaimed CD, Django by Ferro. In addition, Gray's original composition for double bass and guitar, Five Movements, was commissioned and performed by the Chicago Symphony Orchestra Chamber Ensemble at Symphony Center in Chicago. His newest work, Larry Gray 1,2,3 ..., featuring his guitar trio's performances of his original compositions, on Chicago Sessions Records, was released in December 2008.

Gray has recorded with Ramsey Lewis, Nancy Wilson, Curtis Fuller, Ira Sullivan, Lin Halliday, Jodie Christian, Willie Pickens, Nicholas Payton, Randy Brecker, Bunky Green, Bob Moses, Irish musicians Larry Nugent, John Williams and Bohola, pop sensations Linda Eder, Dennis DeYoung, Jim Peterik and Peter Cetera, and songwriter Michael Smith, among others. In addition, Gray can be seen on multiple episodes of the PBS series hosted by Ramsey Lewis, Legends of Jazz. He is a first-call studio musician, and his playing can also be heard on many commercial radio and television jingle and studio projects. Gray has been featured as a solo recitalist on both bass and cello at various universities and venues throughout the midwest. His recitals are unique in their eclecticism, combining jazz, modern improvised music, and European classical repertoire. He was also the featured bassist in Amistad, produced by the Lyric Opera of Chicago. In addition to his work with the Lyric Opera of Chicago, he was principal bass of Civic Orchestra of Chicago, and has served as a substitute with the Chicago Symphony Orchestra. Gray recently collaborated with choreographer Lauri Stallings and dancers from Hubbard Street Chicago and the Joffrey Ballet, developing an original work for solo double bass and dancers.

Gray is a dedicated teacher. In 2007 he joined the full-time jazz faculty at the University of Illinois at Urbana Champaign where he is Assistant Professor of Double Bass in Jazz. He previously held positions at DePaul University, where he taught for nineteen years, and also at Northern Illinois University and the American Conservatory of Music. A dedicated educator, he remains active as a clinician at high school and college jazz festivals.

This article uses material from the article Larry Gray from the free encyclopedia Wikipedia and it is licensed under the GNU Free Documentation License.

Jean-Philippe Rameau Tanzsuite aus "Les Fêtes d'Hébé ou les Talens lyriques"
Update Required To play the media you will need to either update your browser to a recent version or update your Flash plugin.