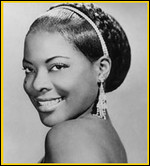 Baker was born in Chicago, Illinois. She is occasionally referred to as Delores Williams because of an early marriage to Eugene Williams; in the late 1940s she was identified in RCA Victor record company files as "D. L. McMurley." She was the niece of blues singer Merline Johnson and was also related to Memphis Minnie.

She began singing in Chicago clubs such as the Club DeLisa around 1946, often billed as Little Miss Sharecropper,[1] and first recorded under that name in 1949. She changed her name briefly to Bea Baker when recording for Okeh Records in 1951, and then became LaVern Baker when singing with Todd Rhodes and his band in 1952.

In 1953 she signed for Atlantic Records as a solo artist, her first release being "Soul on Fire". Her first hit came in early 1955, with the Latin-tempo "Tweedlee Dee" reaching #4 on the R&B chart and #14 on the national US pop charts. Georgia Gibbs' note-for-note cover of Baker's "Tweedle Dee" reached #1; subsequently Baker made an unsuccessful attempt to sue her and petitioned Congress to consider such covers copyright violations.[2][3]

In addition to singing, Baker also did some work with Ed Sullivan[5] and Alan Freed on TV and in films, including Rock, Rock, Rock and Mr. Rock & Roll. In 1964, she recorded a Bessie Smith tribute album, before leaving Atlantic and joining Brunswick Records, where she recorded the album "Let Me Belong to You".

In 1966, Baker recorded a duet single with Jackie Wilson. The controversial song, "Think Twice", featured raunchy lyrics that were not considered appropriate for airplay at that time or even today. Three versions were recorded, one of which is the X-rated version with the raunchy lyrics.[6]

In the late 1960s, Baker became seriously ill after a trip to Vietnam to entertain American soldiers. While recovering at the US Subic Bay Naval Base in the Philippines, her husband, Slappy White filed for a divorce. A friend recommended that she stay on as the entertainment director at the Marine Corps Staff NCO club there, and she remained there for 22 years.

In 1988 she returned to perform at Madison Square Garden for Atlantic Records' 40th anniversary. She then worked on the soundtracks to films such as Shag, (1989), Dick Tracy, (1990) and A Rage in Harlem (1991), which were all issued on CD. She also performed a song on Alan Parker's film Angel Heart (1987), which appeared on the original vinyl soundtrack album, but was not included on the later CD issue "for contractual reasons".

In 1990, she made her Broadway debut replacing Ruth Brown as star of the hit musical Black and Blue. In 1991, Rhino Records released a new album Live in Hollywood recorded at the Hollywood Roosevelt Cinegrill, as well as a compilation of her greatest Atlantic hits entitled Soul on Fire. In 1992, she recorded a well-received studio album, Woke Up This Morning, for DRG Records. She continued performing after having both legs amputated from diabetes complications in 1994 and made her last recording, "Jump Into the Fire," for the 1995 Harry Nilsson tribute CD, For the Love of Harry on the Music Masters label.

LaVern Baker died from cardiovascular disease on March 10, 1997, at the age of 67. She was originally buried in an unmarked plot in Maple Grove Cemetery in Kew Gardens, Queens, New York, but her grave received a headstone on May 4, 2008, after a fundraiser was held by local historians.[7]

This article uses material from the article LaVern Baker from the free encyclopedia Wikipedia and it is licensed under the GNU Free Documentation License.