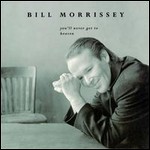 Bill Morrissey (November 25, 1951 – July 23, 2011) was an American folk singer/songwriter from New Hampshire. Many of his songs reflect the harsh realities of life in crumbling New England mill towns.

Morrissey was born in Hartford, Connecticut. He seems to have found his craft and his own voice in the American country blues of Mississippi John Hurt and Robert Johnson, the pure country of Hank Williams, the Kansas City jazz of Count Basie and Lester Young, and the New York folk songwriters of the 1960s. His eponymous (i.e., self-titled) first album released in 1984 on the Reckless label, and then re-recorded for the Philo label, includes the song "Small Town on the River", a song about a small town in New Hampshire after the mill closes.

Over the course of his long career, two of Morrissey's twelve albums received Grammy nominations and several earned 4-star reviews in Rolling Stone.[1] Stephen Holden, for the New York Times, wrote, "Mr. Morrissey's songs have the force of poetry...a terseness, precision of detail and a tone of laconic understatement that relate his lyrics to the stories of writers like Raymond Carver and Richard Ford.[2] He is also the author of the novel Edson (Random House/Alfred A. Knopf 1996) and the recently completed Imaginary Runner.

Although Morrissey expresses admiration for Carver's stories,[3] he credits a fellow New Hampshire writer as a more important mentor and influence:

Bills most recent album Come Running, produced by Bill Morrissey and Billy Conway of Morphine, was released in 2007 by Bill Morrissey on his label, Turn and Spin Media. Come Running features guitar work by Dave Alvin and the remaining members of Morphine, Billy Conway and Dana Colley. Bill planned on releasing a full collection of albums, books and guitar tabs on this new label.

Morrissey, best known for his often dark but always interesting and literate lyrics, also occasionally wrote such humorous songs as "Party at the U.N." ("It's such a happy community / Everyone's got diplomatic immunity") and "Grizzly Bear", about a frustrated working-class gentleman dating a wealthy young woman who wants to "dance till we dehydrate", while he just wants to "take her home and dance the grizzly bear".

This article uses material from the article Bill Morrissey from the free encyclopedia Wikipedia and it is licensed under the GNU Free Documentation License.