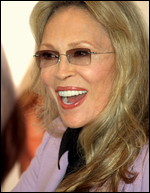 Dunaway was born in Bascom, Florida, the daughter of Grace April (née Smith), a housewife, and John MacDowell Dunaway, Jr., a career non-commissioned officer in the United States Army.[2] She is of Scots-Irish, English, and German descent.[3][4][5] She attended Florida State University,[6] [7] and Boston University, but graduated from the University of Florida in theater. In 1962, Dunaway joined the American National Theater and Academy.

Dunaway appeared on Broadway in 1962 as the daughter of Thomas More in A Man for All Seasons and in Hogan's Goat, for which she was well received. Her first screen role was in the 1967 comedy The Happening. In 1967, she was in Hurry Sundown, a drama directed by Otto Preminger. Preminger regretted casting Dunaway, who stated that Preminger knew nothing about the process of acting. She resented having him yell at her in public and commented, "Once I've been crossed, I'm not very conciliatory." After filming was completed, she sued Preminger to win her release from the five-film contract she had signed with him. An out-of-court settlement was reached in March 1968. Dunaway later admitted in her autobiography, "It cost me a lot of money to not work for Otto again . . . I regretted paying him [but] I thought he was awful." She did win a BAFTA Award for Best Newcomer and was nominated for a Golden Globe Award for New Star of the Year.

That same year, she gained the leading female role in Bonnie and Clyde opposite Warren Beatty, as bank robber Bonnie Parker. She beat out other actresses such as Jane Fonda, Natalie Wood, Cher, and Leslie Caron for the role. The film was an enormous success, and broke taboos on how violence and sex were presented in films. The film was nominated for 10 Academy Awards, including one for Dunaway as Best Actress (she lost to Katharine Hepburn). The film is one that Dunaway continues to be identified with. She also starred with Steve McQueen in the 1968 caper film The Thomas Crown Affair (and had a small role in the 1999 remake with the same title with Pierce Brosnan), and the film was also a hit. For several years after this, she appeared in films that went unnoticed by the general public. Little Big Man alongside Dustin Hoffman was one of the few hits she had at this time. One critical triumph was 1970's Puzzle of a Downfall Child, which Dunaway herself holds in high regard despite its relative obscurity.

Her career bounced back when she starred in Chinatown, an acclaimed mystery film directed by Roman Polanski. Dunaway co-starred with Jack Nicholson as the doomed femme fatale Evelyn Mulwray in one of her most famous roles. She clashed with Polanski during the filming, who reportedly pulled out a single string of her hair that was sticking out conspicuously in the back light. But, in the end, the film was heralded by critics and was a box office success. Dunaway was again nominated for the Academy Award for Best Actress, but lost to Ellen Burstyn. She also appeared as the villainous Milady in The Three Musketeers and its sequel The Four Musketeers and performed in the hugely successful disaster film The Towering Inferno alongside Paul Newman and Steve McQueen. Another successful film was 1975's Three Days of the Condor with Robert Redford.

In 1976, she was cast in Network as the scheming TV executive Diana Christensen, who will do anything for higher ratings. She appeared with William Holden, Peter Finch, and Robert Duvall. It received excellent reviews and did well at the box office. In addition to the favorable notices it attracted on its release, the film has come to be seen as almost prophetic in its examination of the television industry. Dunaway's performance won high praise, and she received the Academy Award for Best Actress and the Golden Globe Award for Best Actress - Motion Picture Drama. After her Oscar win, she turned down Vanessa Redgrave's role in Julia. She headlined the all-star Voyage of the Damned, and had another hit in the thriller Eyes of Laura Mars, finishing out the 1970s with the remake of the The Champ.

In the 1980s, although her performances did not waver, the parts grew less compelling.[8] Dunaway would later blame Mommie Dearest (1981).[8] The film was envisioned as a dramatic piece about film actress Joan Crawford, who allegedly had abused her children. The film opened to negative reviews, yet Dunaway's performance caused a polarized reception. Notoriously harsh critic Pauline Kael raved over Dunaway's performance, while Variety derided her for being over the top. She received a Razzie Award for Worst Actress, though she came in second for both the New York Film Critics Circle Award for Best Actress and the National Society of Film Critics Award for Best Actress. Dunaway would discuss the film periodically in the 1980s, dismissing the film as 'exploitation' and stating her performance was almost kabuki style. Dunaway, in later years, has refused to talk about the film, and it is one topic that is off limits in her interviews. Her performance was later ranked as one of AFI's Best Villains and the infamous quote "No wire hangers, ever!" was ranked one of the most memorable quotes of all time. The film amassed a cult following. She returned, briefly, to Broadway starring in The Curse of An Aching Heart, by William Alfred (author of the previous Hogan's Goat). The play opened at the Little Theatre on Jan 25, 1982. She received top billing for her villainess role in Supergirl (1984), which reviewed poorly as well and yielded disappointing box office returns. She won a Golden Globe Award for her comic role as actress Maud (starring with Richard Burton) in the CBS miniseries Ellis Island. A turnaround in her film career came in 1987 with her performance opposite Mickey Rourke in the critically acclaimed Barfly, for which she was nominated for a Golden Globe Award for Best Actress Motion Picture Drama.

Dunaway starred in the 1986 made-for-television movie Beverly Hills Madam opposite Melody Anderson, Donna Dixon, Terry Farrell and Robin Givens. She had earlier turned down the role of Sable Colby on The Colbys, the Aaron Spelling spin-off of the nighttime soap opera Dynasty.[9] In 1993, Dunaway briefly starred in a sitcom with Robert Urich, It Had to Be You.[10] She also starred in Arizona Dream with Johnny Depp in 1993, which won the Silver Bear. The film was well received and was successful in Europe, but did not do well in the United States. Dunaway won an Emmy for Best Guest Actress for a 1994 role as a murderer in "It's All in the Game," an episode of the long-running mystery series Columbo. In 1994, she was controversially dropped from the musical Sunset Boulevard that was being brought to the stage by Andrew Lloyd Webber. She was involved in a lawsuit with Webber and stated that he asked her to sing in what was beyond her range and then dropped her when she could not do it. In 1996, she found success on stage and toured nationally with the stage play Master Class about opera singer Maria Callas and was well received.[8] On October 2, 1996, Dunaway was awarded a star on the Hollywood Walk of Fame at 7021 Hollywood Boulevard.[11] Dunaway worked with Angelina Jolie and won a Golden Globe Award for Best Supporting Actress in Gia.

In 2000, she turned down Requiem for a Dream[12] and appeared in The Yards. In the following years Dunaway appeared mostly in television guest-roles and small independent movies.[8] In 2006, Dunaway played a character named Lois O'Neill in season six, episode 13 of the crime drama CSI: Crime Scene Investigation, titled "Kiss-Kiss, Bye-Bye". She also appeared on Touched by an Angel and Grey's Anatomy. She served as a judge on the 2005 reality show The Starlet, which sought, American Idol-style, to find the next young actress with the potential to become a major star. In the spring of 2007, the direct-to-DVD movie release of Rain, based on the novel by V. C. Andrews and starring Dunaway, was released. Reportedly, Dunaway has been trying to make a film out of the play Master Class for several years, and even took writing classes to adapt the play. Her Twitter updates state that the film is due to be released in 2013.

Dunaway was previously engaged to Jerry Schatzberg,[13] who directed her in Puzzle of a Downfall Child, and had two-year live-in relationship with actor Marcello Mastroianni, her co-star in A Place for Lovers. In 1974, Dunaway married Peter Wolf, the lead singer of the rock group The J. Geils Band; they divorced in 1979.[1] From 1983 to 1987, she was married to Terry O'Neill, a British photographer.[14] She and O'Neill have one child, Liam O'Neill (born 1980). In 2003, despite Dunaway's earlier claims that she had given birth to Liam, Terry claimed that Liam was adopted.[14]

Dunaway is an adult convert to Roman Catholicism.[15]

In August, 2011, Dunaway was sued for eviction by the landlord of her rent stabilized apartment on East 78th Street in Manhattan. The suit alleged that she was not actually residing in the apartment but rather lived in California. Rent stabilization rules require tenants to live in the apartment they are renting as a primary residence, not as a second home. If Dunaway were to leave the apartment, rented by her on August 1, 1994, the landlord could receive more than double the $1,048.72 per month rent paid by Dunaway.[16] In a voice message to The New York Times, Dunaway said that she had not been evicted, but had chosen to leave the apartment because of its condition and that she had been spending less time in New York City.[17]

This article uses material from the article Faye Dunaway from the free encyclopedia Wikipedia and it is licensed under the GNU Free Documentation License.