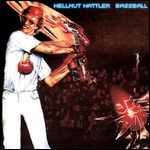 Hellmut Hattler (born 12 April 1952 in Ulm, Germany) is a German jazz and bass player. Hattler took much of his influence from Jimi Hendrix.[1] As a child he learned to play the violin, and in the 1960s played the guitar. Joining Peter Wolbrandt's band marked the debut of his changeover to the bass. In May 1971 with the Wolbrandt brothers Peter and Jan, and Johannes Pappert he founded the pop group Kraan whose early style of Krautrock developed later towards fusion, combining elements of both rock and jazz.[2] Hattler has toured and recorded with many international musicians of the genre including Michael Brecker, Kai Eckhardt, Billy Cobham, Joachim Kühn, Ernie Watts, Alphonse Mouzon, and Nippy Noya.

When asked about the meaning of the band name he explained "It sounds good because it starts hard and aggressive and finishes softly." This duality, seen from a musical perspective would become the trademark of Hattler and his various projects. His music appealed not only to the groove receptive audiences but also to pure music fans. For the first, he delivers highly danceable grooves, while for the others he simply became the German bassist.[3] After six albums and hundreds of concerts with Kraan, with the support of an all-star team of German musicians, he published Bassball, his first solo album. During its formative years the members of the band lived together for economy. Although the first plans to disband began after seven years, in 1978 Kraan published Flyday which was critically acclaimed as one of the best recordings of their career. Three further albums followed and in 1983 the bad was finally dissolved.

Towards the end of the 1980s they reformed for several more years with trumpeter Joo Kraus taking over the keyboards from Ingo Bischof. In the summer of 2000 they made a highly successful comeback, first in Ulm, followed by the Burg Herzberg Festival with Peter Wolbrandt, Jan Fride Wolbrandt, Hellmut Hattler and Ingo Bischof in the line-up. In 2001 Hattler celebrated his 30 years on the stage and published a new CD Live 2000. The band continues to record and play live concerts.

After a short period as a guest player with the group Fehlfarben, Hattler met the trumpeter Joo Kraus from Ulm. Together with the guitarist Torsten de Winkel who can be heard as a guest on all the Tab-Two albums, they brought out their first duo disc Mind Movie. From their early attempts to combine jazz and Hip-Hop, with their seven highly successful albums they became the pioneers of German Acid Jazz formations.[4] Flagman Ahead became a long-lasting hit on American radio stations and the duo composed music for Tina Turner. After many world-wide tours, the duo went their separate ways.[5]

End of 2011 the musicians announced a "temporary reunion" with a tour limited to about 10 concerts, and the release of the 3CD best-of album "Two Thumbs Up" end of April 2012.[6] On 12 April 2012, at a festival on occasion of Hellmut Hattler's 60th birthday, Tab Two performed for the first time since 1999.[7] The recordings were released as MP3 EP "Live at the Roxy". Seven tracks recorded during the tour are now available as a bonus CD of the album "...zzzipp! extended", released in April 2013.[8] In 2013 they played two concerts as Tab Two & Friends, with former guest singer Sandie Wollasch again, and for the first time with a real band, Oli Rubow on drums and Ralf Schmid on keyboards.

Inspired by young musicians who specialised in electronic music, Hattler began his 'Hattler' project which set a new impulse with the No Eats Yes album that was awarded the 2001 German ECHO prize. With the album Deep-Dive-Corp. he established himself as an electronic musician and recorded albums from 2000 to 2006 followed by the publication of a 'Best of' compilation. Since 2006 in a new formation, Fola Dada, with Torsten de Winkel and Oli Rubow the band has been on tour for its CD The Big Flow. In 2001 Hattler founded the 'Bassball Recordings label.

Since 2009 Hattler is on tour with 'Siyou 'n' Hell' with gospel singer Siyou.

Hattler has published two bass books: the Hip Bass school in which he demonstrates his plectrum technique,[9] and the Hellmut Hattler Songbook,[10] of chords and scores from his various projects.

In 1971 Hattler said "We don't have any regular jobs in this society. We concentrate entirely on the music. In this situation we try to make music that separates us from the pop clichés. We strive towards a closed musical experience that touches on all areas of our lives. We follow no one else - we make our own music."

This article uses material from the article Hellmut Hattler from the free encyclopedia Wikipedia and it is licensed under the GNU Free Documentation License.