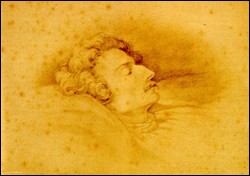 Christian Ludwig Schuncke (21 December 18107 December 1834) was a German pianist and composer, and close friend of Robert Schumann. His early promise was eclipsed by his death from tuberculosis at the age of 23.

He was generally known as Ludwig, and that name also appears as Louis in some references. His surname appears as either Schuncke or Schunke.

He demonstrated his talents very early, and they were encouraged. In March 1822, aged only 11, he performed Johann Nepomuk Hummel's Piano Concerto in A minor, Op. 85, under the direction of Louis Spohr. He then went on a concert tour of Germany. Carl Maria von Weber expressed his approval of Schunckes early compositions.[1]

In 1828, he was one of the four pianists who played Henri Bertini's transcription of Beethoven's Seventh Symphony for eight hands, the others being Bertini himself, Franz Liszt and Sowinsky.[2]

He went to Paris for study, where his main teachers were Friedrich Kalkbrenner, Anton Reicha and Henri Herz,[3] and where he also had friendships with people such as Hector Berlioz, Sigismond Thalberg and Johann Peter Pixis. In Paris, he made his living by demonstrating Duport pianos, and he also lived in Duport's household.[1] After completing his studies, he returned to Germany. In Stuttgart, he made the acquaintance of Frédéric Chopin after hearing him perform his Piano Concerto No. 1 in E minor. Schuncke dedicated his Capriccio in C minor, Op.10, to Chopin.[1] He then moved to Vienna, Prague and Dresden, appearing in concert,[4] before finally settling in Leipzig in December 1833.[5] He lived in a boarding house and his room was next door to that of Robert Schumann,[6] whose very close friend he became. Schuncke was one of the co-founders of the Neue Zeitschrift für Musik,[7] and one of its early contributors, under the pseudonym "Jonathan".[8][9] He was also a member of Schumann's Davidsbund.[3]

He appeared as soloist at the Leipzig Gewandhaus on 27 January 1834.[10] In one article, Schumann favourably compared the playing of the emerging Franz Liszt to that of Ludwig Schuncke.[11]

Schuncke dedicated his Grande Sonate in G minor, Op. 3, to Schumann, who greatly admired the work,[1] and in turn dedicated his Toccata in C major, Op. 7, to Schuncke on its publication in 1834. In a letter dated 4 September 1834, Schumann wrote that his whole wealth could be summed up in three names: Henriette Voigt, Ernestine von Fricken and Ludwig Schuncke.[12]

Schumann's Carnaval, Op. 9, had its origin in a set of variations on a Sehnsuchtswalzer by Franz Schubert. The catalyst for the variations may have been a work for piano and orchestra on the same theme by Schuncke (his Op. 14). Schumann felt that Schuncke's heroic treatment was an inappropriate reflection of the tender nature of the Schubert piece, so he set out to approach his variations in a more intimate way, for piano solo. He worked on the piece in 1833 and 1834. The work was never completed, however, but he did re-use the opening 24 measures for the opening of Carnaval.[13]

Schuncke helped Schumann through his crisis of 1833-34, in which he had a serious depressive illness leading to a suicide attempt, and his brother and sister-in-law both died.[14] Schumann in turn nursed Schuncke through his own final illness.[3] Ludwig Schuncke died on 7 December 1834, two weeks before his 24th birthday, of tuberculosis. He is buried in the Alter Johannisfriedhof in Leipzig.[10] Schumann forever after kept Schuncke's death bed portrait in his own study, in a gallery of pictures hung above his piano.[9]

Although their approaches sometimes differed, Schuncke and Schumann influenced each other to a significant degree. This can be seen in the following example, where an excerpt from Schuncke's Grande Sonate in G minor could easily be played alongside an except from Schumann's Piano Concerto in A minor.

Jozef De Beenhouwer was the first to perform Schuncke's Grande Sonate in G minor, Op. 3, which has also been recorded by Mario Patuzzi and Gregor Weichert. (His name is shown on Patuzzi's and Weichert's albums as "Christian L. Schunke"[15] and "Louis Schuncke"[16] respectively.)

His song Gretchen am Spinnrad is also recorded.[17]

This article uses material from the article Ludwig Schuncke from the free encyclopedia Wikipedia and it is licensed under the GNU Free Documentation License.