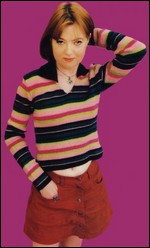 Candida Mary Doyle (born 25 August 1963, Belfast, County Antrim, Northern Ireland) is a keyboard player and occasional backing vocalist with the band Pulp, which she joined in 1984. She joined her brother Magnus Doyle in the line-up.

During Doyle's first few years in the group, Pulp were not enjoying financial success; she has been recorded as saying that she spent more money on the band than she made from it. She kept jobs in two toy shops in Manchester, before being sacked from one for a "lack of dedication". Although Pulp "sort of split up" in the period around 1986, they went on to release Freaks in 1987 with Doyle on board for her first album.

Other artistic members of her family include her mother Sandra Voe, an actress who has appeared in Coronation Street, and two musician brothers. Her grandfather owned a fishing factory in the Shetland Islands. Doyle has lived in many places, including Belfast (where she was born), Manchester, Sheffield from the age of ten and where Pulp formed, and London, her current home.

Since Pulp began a hiatus in 2002, Doyle has occasionally appeared live with Jarvis Cocker, playing keyboards. Following this period, with Pulp's 2011 reunion, Doyle joined the rest of the 'Different Class' line-up on stage in concert for their UK comeback gig at the Isle of Wight Festival on the 11 June 2011.[1]

This article uses material from the article Candida Doyle from the free encyclopedia Wikipedia and it is licensed under the GNU Free Documentation License.

Wolfgang Amadeus Mozart 1. Satz aus dem Klarinettenquintett A-Dur KV 581
Update Required To play the media you will need to either update your browser to a recent version or update your Flash plugin.