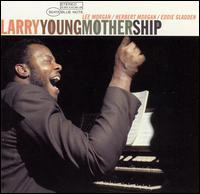 Larry Young (also known as Khalid Yasin (Abdul Aziz); October 7, 1940, in Newark, New Jersey March 30, 1978, in New York City) was an American jazz organist and occasional pianist. Young pioneered a modal approach to the Hammond B-3 (in contrast to Jimmy Smith's soul-jazz style). However, he did play soul-jazz also, among other styles.[1]

Young played with various R&B bands in the 1950s before gaining jazz experience with Jimmy Forrest, Lou Donaldson, Kenny Dorham, Hank Mobley and Tommy Turrentine. Recording as a leader for Prestige from 1960, Young made a number of soul-jazz discs, Testifying, Young Blues and Groove Street. When Young went to Blue Note in 1964, his music began to show the marked influence of John Coltrane. In this period, he produced his most enduring work. He recorded many times as part of a trio with guitarist Grant Green and drummer Elvin Jones, occasionally augmented by additional players; most of this sequence of albums was released under Green's name, though Into Somethin' (with Sam Rivers on saxophone) became Young's Blue Note debut. Unity, recorded in 1965, remains his best-known album; it features a front line of Joe Henderson and the young Woody Shaw. Subsequent albums for Blue Note (Contrasts, Of Love and Peace, Heaven On Earth, Mother Ship) also drew on elements of the '60s avant-garde and utilised local musicians from Young's hometown of Newark. Young then became a part of some of the earliest fusion experiments: first in Lifetime, Emergency! with Tony Williams and John McLaughlin and also on Miles Davis's Bitches Brew. His sound with Lifetime was made distinct by his often very percussive approach and often heavy use of guitar and synthesizer-like effects. He is also known to rock fans for a jam he recorded with Jimi Hendrix, which was released after Hendrix's death on the album Nine to the Universe.

His characteristic sound involved management of the stops on the Hammond organ, producing overtone series that caused an ethereal, drifting effect; a sound that is simultaneously lead and background.

In March 1978 he checked into the hospital for stomach pains. He died there on March 30, 1978, while being treated for what is said to be pneumonia. However, his actual cause of death is unclear.[2][3]

This article uses material from the article Larry Young (musician) from the free encyclopedia Wikipedia and it is licensed under the GNU Free Documentation License.

Franz Paul Lachner Präludium aus der Orchestersuite Nr.1 d-Moll
Update Required To play the media you will need to either update your browser to a recent version or update your Flash plugin.