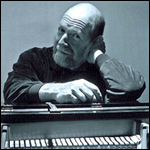 Born in New York City, he began piano at age 4, studied at Williams College, and moved to the San Francisco Bay Area in 1969. He made the first record of his own compositions in 1973 for ECM Records, in a duo with saxophonist/flutist Jan Garbarek. The record name, Red Lanta, was the first of several anagrams of his name that Lande used in his titles.

In 1976 he founded the jazz quartet Rubisa Patrol, with Mark Isham on trumpet, Bill Douglass on bass, and Glenn Cronkhite (later replaced by Kurt Wortmann) on drums. Rubisa Patrol played jazz standards, but also a lot of original music. They performed in the Bay Area and toured extensively in Europe by van. This group made two records for ECM: Rubisa Patrol (1976), Desert Marauders (1977) The band also released a third album titled The Story Of Ba-Ku (1978) on the 1750 Arch Street label.

In the early 1980s Lande taught at The Cornish College of the Arts in Seattle. For three years beginning in 1983 Lande was based in Switzerland where he taught in a jazz school in St. Gallen. In 1987 he moved to Boulder, Colorado to teach at Naropa University. Since then he has continued to reside in Boulder and has worked extensively with many locally-based musicians.

Lande has written many compositions, but is also known for his unusual and distinctive interpretations of popular and jazz standards. He has made several solo piano recordings devoted to such material, including The Eccentricities of Earl Dant (another anagram) in 1977, Art Lande: Hardball! (1987), Art Lande: Melissa Spins Away (1987), Friday the Thirteenth (1996), featuring 13 Thelonious Monk compositions, and While She Sleeps (2005).

While always best known as a pianist, since the mid-1990s Lande has also played and recorded with several groups as a drummer.

This article uses material from the article Art Lande from the free encyclopedia Wikipedia and it is licensed under the GNU Free Documentation License.