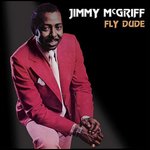 Born in Germantown, Pennsylvania, McGriff started playing piano at the age of five and by his teens had also learned to play vibes, alto sax, drums and upright bass.[2] His first group was as bassist in a piano trio. When he joined the United States Army, McGriff served as a military policeman during the Korean War. He later became a police officer in Philadelphia for two years.[1]

Music kept drawing McGriff's attention away from the police force. His childhood friend, organist Jimmy Smith, had begun earning a substantial reputation in jazz for his Blue Note albums (the two played together once in 1967) and McGriff became entranced by the organ sound while Richard "Groove" Holmes played at his sister's wedding. Holmes went on to become McGriff's teacher and friend and they recorded together on two occasions in 1973 for two Groove Merchant records.

McGriff bought his first Hammond B-3 organ in 1956, spent six months learning the instrument, then studied at New York's Juilliard School. He also studied privately with Milt Buckner, Jimmy Smith, and Sonny Gatewood. He was influenced by the energy and dynamics of organist Buckner and the diplomatic aplomb of Count Basie, and by local organists such as Howard "The Demon" Whaley and Austin Mitchell.

McGriff formed a combo that played around Philadelphia and often featured tenor saxophonist Charles Earland (who soon switched permanently to organ, and became one of the instrument's renowned performers). During this time, McGriff also accompanied such artists as Don Gardner, Arthur Prysock, Candido and Carmen McRae, who came through town for local club dates.[1]

In 1961, McGriff's trio was offered the chance to record an instrumental version of Ray Charles' hit "I've Got a Woman" by Joe Lederman's Jell Records, a small independent label. When the record received substantial local airplay, Juggy Murray's Sue label picked it up and recorded a full album of McGriff's trio, released in 1962. The album also turned out another huge hit in McGriff's All About My Girl,[2] establishing McGriff's credentials as a fiery blues-based organist, well-versed in gospel, soul and "fatback groove".

McGriff recorded a series of popular albums for the Sue label between 1962 and 1965, ending with what still stands as one of his finest examples of blues-based jazz, Blues for Mister Jimmy. When producer Sonny Lester started his Solid State record label in 1966, he recruited McGriff to be his star attraction. Lester framed McGriff in many different groups, performing a wide variety of styles and giving the organist nearly unlimited opportunities to record. McGriff was heard everywhere from an all-star tribute to Count Basie: The Big Band, a series of 'organ & blues band' records such as A Thing to Come By (1969), pop hits (Cherry, The Way You Look Tonight) and funk classics (Electric Funk, and singles such as The Worm and Step 1).

During this time, McGriff performed at clubs and concert halls worldwide. He settled in Newark, New Jersey, and eventually opened his own supper club, The Golden Slipper - where he recorded Black Pearl and another live album, Chicken Fried Soul with Junior Parker in 1971. Beginning in 1969, he also performed regularly with Buddy Rich's band, though the two were only recorded once together in 1974 on The Last Blues Album Volume 1.

McGriff "retired" from the music industry in 1972 to start a horse farm in Connecticut. But Sonny Lester's new record company, Groove Merchant, kept issuing McGriff records at a rate of three or four a year. By 1973, McGriff was touring relentlessly and actively recording again. Around this time, disco was gaining a hold in jazz music and McGriff's flexibility proved infallible.[2] He produced some of his best music during this period: Stump Juice (1975), Red Beans (1976) and Outside Looking In (1978). These albums still stand out today as excellent documents of McGriff's organ playing.[1]

In 1986, McGriff started a popular partnership with alto saxophone player Hank Crawford. Their partnership yielded five co-leader dates for Milestone records: Soul Survivors (1986), Steppin' Up (1987), On the Blue Side (1989), Road Tested (1997), and Crunch Time (1999), as well as two dates for Telarc Records: Right Turn on Blue (1994) and Blues Groove (1995). But it was only during their brief period at Telarc that McGriff's name headlined the popular club and cruise-ship attraction.

Between 1994 and 1998, McGriff also experimented with the Hammond XB-3, an organ synthesizer that increased the organ's capabilities with MIDI enhancements.[2] This gave McGriff an unnatural synthesized sound, which probably explains his retreat from the instrument on late recordings such as 2000's McGriff's House Party (featuring fellow organist Lonnie Smith). House Party did include the use of the XB-3; however, he did not use the MIDI functions.

McGriff was one of the first B3 players to add MIDI to the upper keyboard of his personal B3 to add and extend "his sound" beyond just the drawbar sound of the B3. He incorporated synthesizers in his live performances as he liked vibes, piano, strings, brass and other sounds that could only be created by a synthesizer and which the classic B3 cannot provide. Jimmy purchased the XB-3 as he had more control over the MIDI functions, and the XB-3 weighs about half of the classic B3, which made it easier to move.

Jimmy, as well as Groove Holmes, spent a great deal of time experimenting and modifying their B3's and Leslie speakers over the years. Some of these modifications made their way into products manufactured by both Hammond and Leslie, for which they did not always receive credit.

Along with the soul-jazz sound, McGriff experienced renewed popularity in the mid-1990s, forming 'The Dream Team' group, which featured David "Fathead" Newman (a longtime saxophonist with Ray Charles) and drummer Bernard Purdie, and recording the Straight Up (1998), McGriff's House Party (2000), Feelin' It (2001), and McGriff Avenue (2002) albums.

On March 29, 2008, McGriff was given a last private concert by Bill "Mr. B3" Dilks and drummer Grant MacAvoy in his honor in Voorhees Township, New Jersey. Dilks brought his B3 and played for McGriff, his wife Margaret, their guests, and the folks at the Genesis Health Care Center. As Dilks said, "The Hammond reaches its players far beyond where the conscious mind lives".

A resident of Voorhees Township, New Jersey, McGriff died there at age 72 on May 24, 2008, due to complications of multiple sclerosis.[3]

This article uses material from the article Jimmy McGriff from the free encyclopedia Wikipedia and it is licensed under the GNU Free Documentation License.