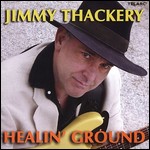 Thackery spent fourteen years as part of The Nighthawks, the Washington, D.C. based blues and roots rock ensemble. After leaving the Nighthawks in 1986, Thackery toured under his own name.

Born in Pittsburgh and raised in Washington, Thackery co-founded The Nighthawks with Mark Wenner in 1972 and went on to record over twenty albums with them. In 1986 he began touring with The Assassins, a six-piece original blues, rock and R&B ensemble which he had previously helped start as a vacation band when The Nighthawks took one of their rare breaks. Originally billed as Jimmy Thackery and The Assassins, the band toured the U.S. Northeast, Mid-Atlantic, South, and Texas regions. The Assassins released a variety of recordings on the Seymour record label, two on vinyl (No Previous Record and Partners in Crime) and the 1989 CD Cut Me Loose.

In the wake of the Assassins 1991 break-up, Thackery has been leading a trio, Jimmy Thackery and the Drivers, whose early recordings were for the San Francisco, California based Blind Pig Records. In 2002 Thackery released, We Got It, his first album on Telarc and in 2006, In the Natural State with Earl and Ernie Cate on Rykodisc. In 2007, he released Solid Ice again with The Drivers.[2] His latest album 'Feel the Heat' was released in April 2011.

This article uses material from the article Jimmy Thackery from the free encyclopedia Wikipedia and it is licensed under the GNU Free Documentation License.