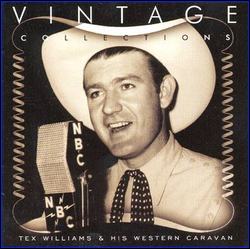 He is best known for his talking blues style; his biggest hit was the novelty song, "Smoke! Smoke! Smoke! (That Cigarette)", which held the number one position on the Billboard charts for six weeks in 1947. "Smoke" was the No. 5 song on Billboard's Top 100 list for 1947, and was No. 1 on the country chart that year.[1] It can be heard during the opening scenes of the 2006 movie, Thank You for Smoking.

Williams' backing band, the Western Caravan, numbered about a dozen members. They attained an enviable level of fluid interplay between electric and steel guitars, fiddles, bass, accordion, trumpet, and other instruments (even an occasional harp). At first they recorded polkas for Capitol Records with limited success. That was changed by the success of "Smoke, Smoke, Smoke" written in large part by Merle Travis.[2]

His final radio show was a lengthy conversation taped by Bill Aken's radio program The Country Call Line while Williams was in the Newhall, California hospital. His wife Dallas had asked Aken to call Williams in the hospital and try to cheer him up. He died two days later. Aken ran the entire hour and a half tape without commercial interruption, as a tribute to his long-time friend and former employer.

Williams and the Western Caravan appeared in the following films:

This article uses material from the article Tex Williams from the free encyclopedia Wikipedia and it is licensed under the GNU Free Documentation License.