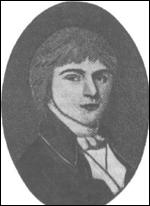 Lessel was born in Puławy, Poland. His father, Wincenty Ferdynand Lessel, was a pianist and composer of Czech origin who served as his first teacher.

In 1799 Franciszek Lessel went to study with Joseph Haydn and continued to do so until Haydn's death.

Lessel worked as a court musician, headed Warsaw's Amateur Music Society, and gave lessons on how to play the glass harmonica. In later life he largely had non-musical administrative and inspector jobs.[1] He died in Piotrków Trybunalski.

His Grand Trio for Clarinet, Horn, and Piano, Op. 4 (1806) is notable for its contribution to this ensemble instrumentation. Among his most noted pieces is his Fantaisie in E minor, Op.13,[2] which was dedicated to Cecylia Beydale. Beydale was for a time his lover, until they discovered they had the same mother.[3]

This article uses material from the article Franciszek Lessel from the free encyclopedia Wikipedia and it is licensed under the GNU Free Documentation License.

Sergej Rachmaninov Rhapsodie über ein Thema von Paganini
Update Required To play the media you will need to either update your browser to a recent version or update your Flash plugin.