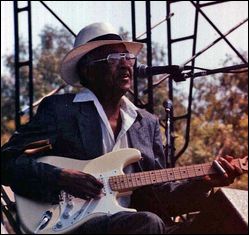 Homesick James (d. December 13, 2006)[1] was an American blues musician known for his mastery of slide guitar. He recorded covers of "Stones In My Passway" and "Homesick". James worked with his cousin, Elmore James, and Sonny Boy Williamson II.[2]

He was born in Somerville, Tennessee, United States, the son of Cordellia Henderson and Plez Williamson Rivers, who were both musicians.[3] He developed a self-taught style of slide guitar through playing at local dances in his teens. Little is known about his early life.[4] He claimed to have played with Yank Rachell, Sleepy John Estes, Blind Boy Fuller and Big Joe Williams, among others, and to have been acquainted with Robert Johnson. He also claimed to be the older cousin of Elmore James,[4] to have bought James his first guitar, and to have taught him how to play slide. However, some of these claims are unconfirmed.

By the mid-1930s he was based in Chicago, and working with Horace Henderson's band at the Circle Inn, and with pianist Jimmy Walker at the Square Deal Club.[5] He may have first recorded for RCA Victor in 1937, but this is also unconfirmed, and by 1938 may have begun playing electric guitar. His first known recordings were in 1952 for Chance Records, recording the tracks "Lonesome Ole Train" and "Homesick" which gave him his stage name.[4] During the late 1940s and 1950s he worked with both Sonny Boy Williamson II (Rice Miller), and with Elmore James, and in the early 1950s he worked in bands including Baby Face Leroy Foster, Snooky Pryor, Floyd Jones, and Lazy Bill Lucas.[6] He was a longtime member of Elmore James' band from 1955 to 1963, contributing to such tracks as "Dust My Broom," "The Sky Is Crying," and "Roll and Tumble." Elmore James is said to have died on Homesick's couch, while the latter frantically searched for the former's heart pills.[7]

As a solo performer, he recorded for the Colt and USA labels in 1962, including a cover version of Robert Johnson's "Crossroads". Homesick James's slide guitar style, not as refined as Elmore James', traces back to Johnson's. He also recorded a 1964 album for Prestige Records, Blues On the South Side (Prestige OBCCD 529-2), including another of his best-known covers, "Stones In My Passway", and some tracks for Vanguard that are available on the compilation album Chicago: The Blues Today.[8] One of his own songs, "Gotta Move" (also on Blues On the South Side) was covered (as "Got To Move") both by Elmore James and Fleetwood Mac. He is referenced by name in the 1989 song 'Fergus Sings The Blues' by Scottish band Deacon Blue with the line "Homesick James, my biggest influence".

This article uses material from the article Homesick James from the free encyclopedia Wikipedia and it is licensed under the GNU Free Documentation License.