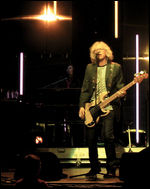 Michael Edward Mills (born December 17, 1958) is an American multi-instrumentalist, singer, and composer who was a founding member of the alternative rock band R.E.M.[2] Though known primarily as a bass guitarist, backing vocalist, and pianist, his musical repertoire also includes keyboards, guitar, and percussion instruments. He contributed to a majority of the band's musical compositions.

Michael Edward Mills was born in Orange County, California and moved to Macon, Georgia when he was 10 years old. Mills met Bill Berry, who would later be his bandmate in R.E.M., in Macon.[3]

Mills and Berry started out in bands together. Early projects included the band Shadowfax (later called The Back Door Band).[3]

Mills attended the University of Georgia in Athens, Georgia, which is where R.E.M. formed.[4]

Mills is credited with being the chief composer behind many of R.E.M.'s songs, including "Nightswimming",[5] "Find the River", "At My Most Beautiful", "Why Not Smile", "Let Me In", "Wendell Gee", "(Don't Go Back To) Rockville",[5] "Beat a Drum", "Be Mine" and "What's the Frequency, Kenneth?". In particular, R.E.M.'s 2004 album Around the Sun was heavily shaped by Mills' piano and keyboard contributions.

Mills is also responsible for the prominent backing vocal and harmony parts found within the band's back catalogue, with his vocal contributions arguably being most noticeable on 1986's Lifes Rich Pageant and 2008's Accelerate. In addition to providing backing vocals, he has also sung lead vocals on the songs "Texarkana", "Near Wild Heaven", The Clique cover "Superman" and The Troggs cover "Love is All Around".

Mills said there is no possibility of an R.E.M. reunion.[6] Mills described it as "31 wonderful years and the opportunity to end it on our own terms."[7] The band had been talking about disbanding since 2008.[8]

Mills continues to write music and perform with friends on various projects.[9] In 2012, Mills contributed piano playing to a Record Store Day single released by Drive-By Truckers member, Patterson Hood, in protest of a Walmart development being built in Athens, Georgia.[10]

Mills is a member, along with Steve Wynn, Scott McCaughey, Peter Buck, and Linda Pitmon, of The Baseball Project.[11]

Mills also performs as part of singer-songwriter Joseph Arthur's band.[12] On April 3, 2014, while performing with musical guest Joseph Arthur, Mills broke the news that David Letterman would be retiring in 2015.[13] Mills took a band selfie that he posted to Instagram[14] and did a short interview about "breaking" the story[15]

Since 2010, Mills has played with a rotating group of musicians for a series of concerts built around Big Star's seminal album, Third/Sister Lovers. Known as Big Star's Third, the concerts have taken place in London, Sydney, Chicago, Seattle, Los Angeles, and New York.[16]

In 2016, he toured to support a Concerto for Violin, Rock Band, and String Orchestra with childhood friend Robert McDuffie.[18]

Annoyed at what he characterized "lazy journalism" surrounding comments about Michael Stipe (and whether he was gay), Mills and guitarist Peter Buck "announced via YouTube that they were finally coming out too ... as straight."[21]

Mills is an avid fantasy sports player, with interest in NFL, NBA, and PGA teams, among others.[22] He is also a fan of Georgia Bulldogs football, the University he attended in Athens, Georgia.

This article uses material from the article Mike Mills from the free encyclopedia Wikipedia and it is licensed under the GNU Free Documentation License.