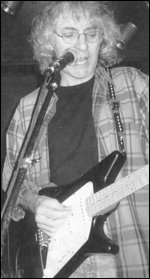 Albert William Lee (born 21 December 1943) is an English guitarist known for his fingerstyle and hybrid picking technique. Lee has worked, both in the studio and on tour, with many famous musicians from a wide range of genres. He has also maintained a solo career and is a noted composer and musical director.

Lee was born in Lingen, Herefordshire, but grew up in Blackheath, London, a member of a Romani family.[1] His father was a musician, and Lee studied piano, taking up the instrument at age seven.[2]

During this time, Lee became a fan of Buddy Holly and Jerry Lee Lewis. He took up guitar in 1958 when his parents bought him a second-hand Höfner President which he later traded in for a Czechoslovakian Grazioso, the forerunner of the Futurama. Lee left school at the age of 16 to play full-time.

Lee was with a variety of bands from 1959 onwards, playing mostly R&B, country music and rock and roll. In addition to Buddy Holly, his early guitar influences included Cliff Gallup, Grady Martin, the Everly Brothers, Scotty Moore, James Burton and Jerry Reed.[3] Lee first experienced commercial success as the lead guitarist with Chris Farlowe and the Thunderbirds. Lee says that he enjoyed playing the Stax-type material, but he really wanted to play country music. Consequently, he left Farlowe and the Thunderbirds in 1968.

During his time playing with Heads Hands & Feet, Lee became a "guitar hero", playing his Fender Telecaster at breakneck speed.[4] Heads Hands & Feet became a popular live band in the UK, making appearances on The Old Grey Whistle Test and also in Europe, where they appeared on the German music programme Beat-Club. In October 1969 just before the end of Albert's time with the band Country Fever, an RCA package toured six countries in eleven days, starting at the Nashville Room with the London band the Kingpins.[5]

In 1971, Lee performed with Deep Purple's keyboard player Jon Lord on the studio recording of Lord's Gemini Suite. That opus was a follow-up to Deep Purple's Concerto for Group and Orchestra. Ritchie Blackmore had played the guitar at the first live performance of the Gemini Suite in September 1970, but declined the invitation to appear on the studio version, which led to the involvement of Lee. Other performers were Yvonne Elliman, Ian Paice, Roger Glover, Tony Ashton and the London Symphony Orchestra conducted by Sir Malcolm Arnold.

Lee left for Los Angeles in 1974 and, through his friend bassist Rick Grech (of Blind Faith), did some session work on three albums with the Crickets who also at the time included Sonny Curtis and Jerry Allison. One of these releases is titled A Long Way From Lubbock. Lee also received many other offers of session work. In 1976, he was asked to join Emmylou Harris's Hot Band, replacing one of his heroes, James Burton, who was returning to perform with Elvis Presley. The Hot Band featured other musicians including Ricky Skaggs and Rodney Crowell. Starting in 1978, Lee worked for five years with Eric Clapton, playing and singing for a live concert recording at the Budokan in Japan.

Lee was responsible for the Everly Brothers' 1983 reunion concert and was its musical director.[6] He played regularly with the Everlys for over twenty years.

In 1987, Lee was invited by Gerry Hogan to headline at a steel guitar festival in Newbury, Berkshire. Lee was at first intimidated by the prospect of having to front a band, however, the gig was successful and he now tours with them on a regular basis. They are renowned for attracting celebrities to their gigs. Stars such as Eric Clapton, Tommy Emmanuel, Lonnie Donegan, Dave Edmunds, Marty Wilde, Willie Nelson, Nanci Griffith, Don Everly, Emmylou Harris, Sonny Curtis and Rodney Crowell have all jammed with the band at one time or another.

In the early 2000s Albert Lee toured with Bill Wyman's Rhythm Kings and usually appeared front of stage where he warmly smiled at the applause he received.

In 2002, Lee appeared at the Concert for George. Also in 2002, Lee received a Grammy Award for Best Country Instrumental Performance for Foggy Mountain Breakdown from the CD Earl Scruggs and Friends. In September 2006 Lee took part in Primal Twang: The Legacy of the Guitar—the first definitive theatrical journey through the guitar’s colourful and surprisingly controversial 3500-year history. Lee appeared at the 2007 Crossroads Guitar Festival on 28 July and performed with Bill Wyman's Rhythm Kings at the Ahmet Ertegun tribute show at The O2 in London on 10 December. A new album entitled Like This was released in spring 2008 to coincide with their European tour. He lives in Malibu, California.

Lee has received many awards as a guitarist, winning five consecutive times Guitar Player magazine's "Best Country Guitarist".[7] Lee is known within the music industry for his speed of playing and his technical virtuosity[8] and yet by the same token, one of the most melodic, playing slower passages approximating the sound of the pedal steel guitar with his Music Man and Telecaster guitars which are equipped with B-Benders.

He is known as "the guitar player's guitar player".[8] Lee is also referred to as "Mr. Telecaster".[9] A long-time Telecaster player, Lee wrote a foreword to A.R. Duchossoir's book detailing the history of the instrument.

Lee's song "Country Boy" helped to redefine country guitar for a whole generation of players, and was later to become a hit for multi-instrumentalist Ricky Skaggs.

Despite positive press from Melody Maker and New Musical Express, Lee has never achieved any great commercial success in terms of record sales during his career, but more as a live performer, session player and sideman, perhaps due to his self-effacing stage presence. Lee has been described by his peers, who include Jimmy Page and Ritchie Blackmore, as a complete gentleman who does not know the meaning of the word ego.[4]

After Gram Parsons's death, Emmylou Harris was told that she could only gain the backing of a major record label if she could assemble a really "Hot Band". Harris did just that, enlisting guitarist James Burton and pianist Glen Hardin, both of whom had played with Elvis Presley and Parsons; she named the band "The Hot Band". When Burton left to return to Elvis Presley, Lee was his replacement. Harris said of him that Lee is "a brilliant guitar player. His sound is unmistakable—often emulated, never equaled. When Saint Peter asks me to chronicle my time down here on earth, I'll be able to say (with pride if that's allowed) that for a while I played rhythm guitar in a band with Albert Lee."[10]

In 2017, Lee was honoured with the Trailblazer Lifetime Achievement Award at the UK Americana Awards.

Albert Lee owns around 40 guitars, including Don Everly's Gibson J-200. The Gibson Guitar Corporation made one for Don Everly and the other for Phil. The guitars have an all black, high-gloss lacquered finish and are equipped with twin Everly Brothers white pickguards. The Everly Brothers' manager Wesley Rose had wanted the guitar to be presented to the Country Music Hall of Fame, but Everly informed him that guitars like that should be played, not kept sitting in a glass case. Don Everly presented it to Lee, along with his Gibson Everly Brothers model.[3]

Eric Clapton gave Lee the Gibson Les Paul Custom that he played while with Delaney and Bonnie. Lee also plays his signature Music Man (the guitar shown in the photographs) and a 1950s Telecaster (and has versions of both with custom B-Benders), a 1958 Stratocaster and a Martin 000-28 acoustic.[3]

This article uses material from the article Albert Lee from the free encyclopedia Wikipedia and it is licensed under the GNU Free Documentation License.